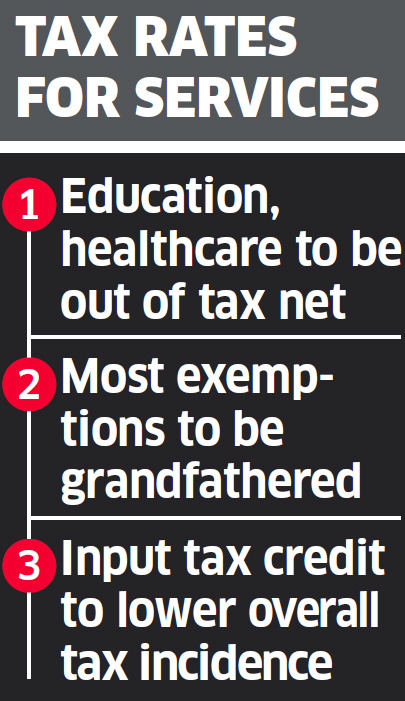 SRINAGAR: India finalised the four-slab structure for taxation of services under the proposed goods and services tax (GST) with a standard rate of 18% that will apply to most of them. This won’t pinch the common man as the effective tax incidence is set to decline, asserted union finance minister Arun Jaitley.

“These services will now get input tax credit… Net effect of GST on consumers will not be inflationary,” Jaitley, who is also the chairman of the GST Council, told reporterson Friday after the second and concluding day of its meeting. “The actual incidence on consumers will come down.”
With most of the council’s agenda having been achieved — fitting goods and services into the respective slabs — GST looks set to be rolled out as expected on July 1.

“Most work in relation to rollout is now complete… only a few things remain,” Jaitley said, adding that the next meeting of the GST Council will be held on June 3.
The four slabs are in line with the tax rates for goods — 5%, 12%, 18% and 28%. Only five services — including five-star hotels, movie tickets, racing, betting on racing and casinos — will attract 28% levy. Education and healthcare will continue to be exempted.

Movie tickets should ideally get cheaper, but states continue to wield powers to bring in new law to impose taxes for local bodies, a senior government official said.

The bulk of services will fall in the 18% bracket, including financial services such as banking and insurance, telecom, information technology, government services such as auction of resources including spectrum, and restaurants that have air-conditioning or serve liquor.

“The default or standard rate for services under GST would be 18%,” Jaitley said.
EFFECTIVE TAX BURDEN TO COME DOWN
The finance minister said most exemptions available now would be grandfathered under GST. However, he pointed out that the weighted average of services taxation would be below 18% as service providers will be able to avail of input tax credit.

“Actual tax will come down,” he said, explaining that service providers can claim back taxes on goods purchased for the establishment and services consumed, bringing down their overall tax burden.
Asked about the increase in tax on telecom and financial services such as insurance and banking, the minister said the effective tax with seamless input tax credit would come to 15%, effectively little changed.

In the case of restaurants, non-AC establishments and those that don’t serve liquor will attract 12% GST. Smaller restaurants with less than Rs 50 lakh annual turnover can avail of the composition scheme with 5% GST. This is a simplified system meant for small businesses.
As for the hospitality industry, those with room tariffs below Rs 2,500 will face 12% GST, those with Rs2,500-5,000 rents will face 18% and five-star hotels will face 28%.

The transport sector, including cab aggregators, will face 5% GST as there is no input tax credit for their key input — fuel. However, the tax will go up once petrol and diesel are brought under the GST net.

Work contracts that now attract 6% service tax plus state taxes of 1-2% without any input tax credit will now face 12% with input tax credit.
A 12% rate for work contracts, with full input credit, is an encouraging development as it would be a simpler tax system and should reduce the cash component of the economy,” said Pratik Jain, partner and leader, indirect tax, PwC.

The GST Council will take up taxation of gold and other precious metals besides six items such as packaged foods, footwear and textiles at the next meeting on June 3, Jaitley said. Besides, taxation of lottery service has also not been decided yet “The council’s decision on services rate structure reflects the logic applied for goods — basically to stay close to current effective rates. This has led to a less-than-ideal multiple rate structure for services which we hopefully will merge as we go along,” said Harishanker Subramaniam, national leader, indirect tax, EY.

GST, which seeks to replace multiple state and central taxes with a single levy, is proposed to be rolled out on July 1, although industry has sought its deferral to September.

“Given the stated intention of the government of not allowing a long lead time to the companies post announcing the rates, this development strongly indicates that the government is serious about meeting the July 1 deadline for GST implementation,” said Rajeev Dimri, leader, indirect tax, BMR & Associates.

The government is keen on the earlier date as it wants to get the system in place well in advance of the festival season that starts a few months to September.

“Given the stated intention of the government of not allowing a long lead time to the companies post announcing the rates, this development strongly indicates that the government is serious about meeting the July 1 deadline for GST implementation,” said Rajeev Dimri, leader, indirect tax, BMR & Associates.

The government is keen on the earlier date as it wants to get the system in place well in advance of the festival season that starts a few months hence.