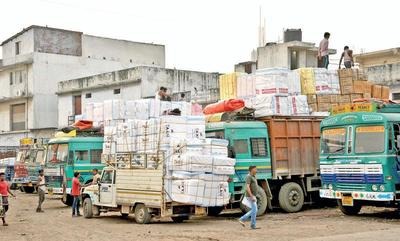 Surat: Textile traders and transport firms are bickering over latter’s insistence to furnish GST registration number of consigner and consignee for hassle-free transportation of textile goods to other states.
Market sources said parcels of saris and dress material worth crores of rupees have been stuck at transport godowns after transporters made it mandatory for the traders to furnish GST registration numbers of the consignee as well.
Federation of Surat Textile Traders Association (FOSTTA) and Vyapar Pragati Sangh (VPS) jointly condemned the action of the transporters and called it illegal.
“There are many small traders in the market who are yet to get registration numbers. Those who have got the registration are facing problems in clubbing their GST number with their respective bank accounts. In such a situation, the transporters are harassing the traders by demanding GST number of the consignee and consigner both,” VPS president Sanjay Jagnani said.
Jagnani added, “This is wrong, Even the recently concluded GST Council meeting had given relief in e-way bill and no penalty is to be levied on supply of goods without GST number. We will take this issue to senior authorities in the state tax department and lodge an official complaint against the transporters.”
Jagnani said textile goods to the tune of over Rs 90 crore has been stuck in the godowns due to the adamant attitude of the transporters.
Surat Textile Goods Transporters Association president Yuvraj Deshle said, “The transporters will be meeting to discuss the issue . We do not want to harass the traders. Actually, the transporters are also losing business in Diwali..”
source:https://timesofindia.indiatimes.com/city/surat/traders-and-transporters-bicker-over-gst-number/articleshow/61013106.cms