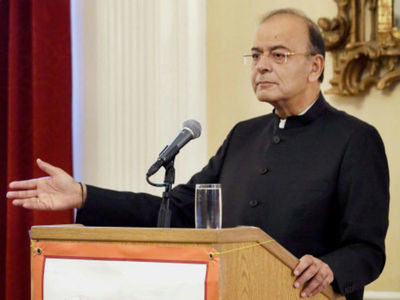 NEW DELHI: There is clear evidence now that the slowdown effect of demonetisation and the goods and services tax (GST) has “more or less played out,” finance minister Arun Jaitley said on Friday.
Addressing businessmen in the US Jaitley, who is on a week-long visit to Washington, said the economy is poised for strong, sustainable and balanced growth on the back of reforms measures unveiled by the government so far.
The finance minister’s comments come a day after data showed factory out growth rebounded in August to 4.3% from 0.9% in July after shrugging off the impact of rollout issues linked to GST.
Retail inflation remained unchanged in September, bringing cheer to policymakers, who were facing criticism after growth slowed to a three-year low of 5.7% in April-June. Several economists and multilateral agencies have pared India’s growth estimate, citing the lingering effects of demonetisation and GST implementation issues.
“The implementation of GST from July 1, and its gradual complete transition, follow-up to demonetisation, and enacting other structural reforms by the government of India would take the economy towards higher growth trajectory,” an official statement quoted Jaitley as saying.
The FM said FDI flows to India have increased in 2016-17, indicating improved global confidence in the Indian economy. He also spoke about the interface between global and the Indian economy, national investments and the infrastructure fund, reform initiatives and efforts to improve ease of doing business.
On the sidelines of the World Bank and IMF meetings, FM held bilateral meetings with US treasury secretary and the US commerce secretary in Washington DC and raised the issue of H1B/L1 visas. FM also highlighted the contribution that skilled Indian professionals have made to the US economy, and that must be suitably appreciated by the US side. He made a strong case for reforms in H1B/L1 visa processes and social security contribution so that high calibre Indian professionals serving American interest are not unfairly deprived of their well-earned money.
source:https://timesofindia.indiatimes.com/business/india-business/slowdown-impact-of-demonetisation-gst-has-played-out-jaitley/articleshow/61075630.cms