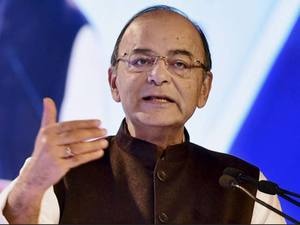 NEW DELHI: Finance Minister Arun Jaitley slammed the Congress and his critics on the implementation of Goods and Services Tax, saying the government did not indulge in populism and followed the right economic policy but since the main opposition is an “opportunist” party it is opposing the tax reform.

Talking to reporters in Washington, Jaitley said, “Attacking or ending this black money was never a priority for the Congress. So their concern (about demonetisation) is natural. And GST was a Congress move. But since (the Congress) party is an opportunist party, it is opposing it.”

Congress has attacked the Narendra Modi government on the slowdown in the economy. BJP veteran Yashwant Sinha had also criticised Jaitley and alleged that GST has not been implemented in the right manner.

Read more at:
//economictimes.indiatimes.com/articleshow/61093718.cms?utm_source=contentofinterest&utm_medium=text&utm_campaign=cppstCongress has attacked the Narendra Modi government on the slowdown in the economy. BJP veteran Yashwant Sinha had also criticised Jaitley and alleged that GST has not been implemented in the right manner.

“Populism is what we did not indulge in. We could have let people live in a cash dominated economy and let India continue to have a shadow economy and have everyone really prosper on that basis. (But) we struck a blow to that kind of an economy. That’s not populism. That was the right economic policy to follow,” Jaitley said.

Jaitley also alluded to his opponents having their own selfish interests in mind. “… obviously, I think there are many in the system who normally don’t see beyond their nose,” he said.
The finance minister also emphasised that structural reforms like demonetisation and GST have come at the right time when the Indian economy was doing well. He said by ushering these reforms India has shown that it has the “courage and capacity” to bring in such reforms.
“When the world was growing at two and-a-half per cent, India was the fastest growing major economy in the world. That was a time to really fix the roof. You don’t have to wait for a downward slide in order to do it,” Jaitley told reporters, adding, “I think, this was just the right time to bring about structural changes.”

aking on the critics of demonetisation, the FM said, “To say it’s a very risky proposition, it will have adverse consequences for a quarter or two, so let’s not attempt it? Can India say, you will have destocking, so let s not attempt a GST?”

He asserted that since the global economy is on an upswing, India too should see a “higher growth trajectory” in the coming days.