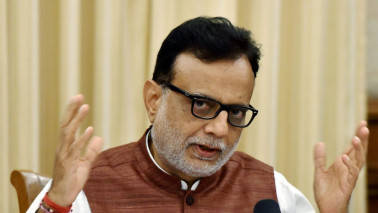 Three months after Goods and Services tax (GST) was rolled out, Revenue Secretary Hasmukh Adhia speaks to Moneycontrol about the experience so far, procedural irritants, delayed refunds, technical glitches and plans to iron out rough edges of the new tax system

What have been the biggest challenges in the first three months of GST’s implementation?

The main challenge has been the issue of compliance. Some taxpayers and tax practitioners had difficulties in coping with compliance because it was a new system with a new format of filing returns. The second issue was of exporters, which we thought was a genuine issue. Even the micro, small and medium enterprises (MSMEs) had compliance related issues and we have given them relief (by changing their timeline for return filing to quarterly from monthly). We have resolved that matter in the last meeting (on October 6).

Has there been instances about attempts to evade taxes?

Not yet. But, in general we know that people are now planning to understand the law and rules from that angle.

The compliance rate has been low for GSTR1. About 46 lakh taxpayers have filed taxes compared with an eligible tax base of 60 lakhs. What could be the reason? Is it because taxpayers who are not eligible have also been migrated to GST?

The number of taxpayers who have filed 3B returns and paid taxes for the month of July 2017 is 54 lakhs, which is 90 percent compliance. However, the number of GSTR 1 returns filed for July is 46 lakhs. It is possible that some of them might have migrated without being eligible. They may de-register. That number is in question. There are 91.86 tax payers who have fully transited to GSTN.

Transporters have been complaining about the e-way bill and they want petroleum products to be a part of GST. What are your views?

There is no new effect of petrol and diesel remaining out of GST on the taxation of goods transport sector. There was a 5 percent reverse charge (a mechanism where the recipient of the good or service pays the taxes instead of the supplier) on transport. The same thing is in GST. A 5 percent service tax was applicable without availing any input tax credit (ITC). It is the same now. There is no compliance burden on transporters now, unless he wants to take the compliance burden now and register. In that case, he will have to pay 12 percent GST and then he can claim ITC.

Has everything been sorted as far as GST Network (the technology backbone) is concerned?

We have tried to improve it. In the last 30 days, there has not been any technical glitch. The last filing of returns was very smooth. There was no problem in filing GSTR1. But, certain features that people want are being made available now. For example, there is an application for advance ruling form, which still has to be prepared by GSTN.

Is there a plan to bring real estate within the ambit of GST?

I understand that the Finance Minister has mentioned that we can discuss the real estate issue in the next GST Council meeting on November 10.

In the run up to the GST, one of the concerns pointed out by the experts were that it could lead to a lot of disputes reaching the courts. What has been the experience so far?

People have raised disputes about the legal provisions. Writ petitions are there. In fact, this has been a major area of challenge for us. If all High Courts start giving different orders, then that could be a problem.

Very little is known about the Centre’s potential revenue loss because of GST. What has been the trend so far?

As we are allowing seamless ITC, there could be a reduction in revenue for the Centre also. The states have been protected with a compensation cess. I don’t want to pre-judge anything. We would like to watch the revenue trend for six months at least. Without seeing a trend for six months, I cannot predict any overall revenue trends. We will have to ensure that the compliance level improves. We don’t want to give people the liberty that they have an option to not file returns. We need to have some amount of discipline in compliance. Since compliance is low, revenue figures will also be low.

What has been the feedback on the inflation front?

Inflation has quite been under control. Whatever increase that has been in CPI (consumer price index) basket is because of food and fuel and not because of GST.

When can we see a rationalisation of rates?

The council has approved an approach paper. There are some principles in that. A committee will work on those principles and give recommendations.

What are the plans to bring petroleum products under GST?

The states will first like to watch the revenue trend. If they are keen to discuss it, we will definitely bring it in the agenda of the GST Council. Unless revenue stabilises, it will be difficult to include petroleum products under GST.

How has been the revenue collections so far for this year?

What is your view of the state of the economy and current slowdown?

Growth takes place whenever there is demand. Whenever there is demand in the economy, it is met by better capacity utilisation or by creation of new production capacity. Now, production will go up if there is demand. There is no factor that is suppressing demand right now. What happened in the April-June quarter is a one-off thing. Everybody knows that there was a lot of de-stocking in that quarter. That’s why the GDP growth rate was low (5.7 percent). You will see much better picture in the second and third quarters. It will take six to nine months for GST to stabilise.

There is a lot of latent demand. If people have money in their hands, they will spend. When there is demand, there will be someone to cater to it.
source:http://www.moneycontrol.com/news/business/economy/it-will-take-6-to-9-months-for-gst-to-stabilise-hasmukh-adhia-2413341.html