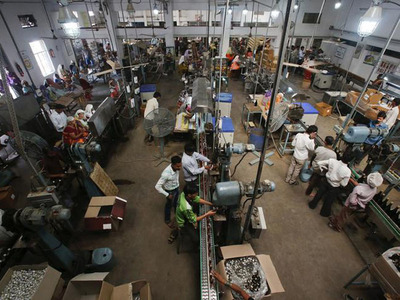 NEW DELHI: Economic affairs secretary SC Garg on Tuesday said the temporary disruptive effect of the Goods and Services Tax+ (GST) is over as the manufacturing sector recorded positive growth of 3.1 per cent in August.
Commenting on the twin data on industrial output and price situation, he said that the benign and moderate inflation has become the order of the day.
“Manufacturing grew by 3.1 per cent in August after two months of negative growth of -0.5 per cent and -0.3 per cent. Temporary disruptive effect of GST is over,” he said in a tweet.
Overall, industrial production grew at a nine-month high of 4.3 per cent in August, mainly on account of robust performance of mining and power sectors coupled with higher capital goods output.
India’s economic growth slipped to a three-year low of 5.7 per cent in the first quarter of the current fiscal.Despite slowdown, the Reserve Bank of India at its policy review meeting earlier this month kept the key interest rate unchanged at 6 per cent, citing upward trend in inflation.
“Benign and moderate inflation is the order of the day with consumer inflation of 3.3 per cent in September. Food inflation remained 1.8 per cent only,” he said in another tweet.
SOURCE:https://timesofindia.indiatimes.com/business/india-business/temporary-disruptive-effect-of-gst-over-says-economic-affairs-secretary/articleshow/61117615.cms