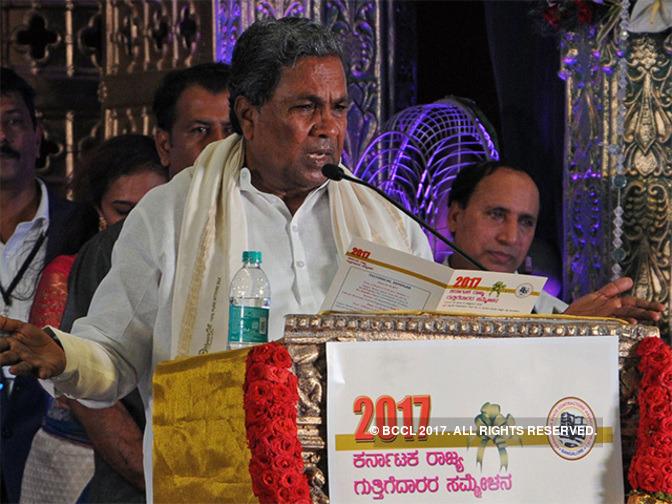 BENGALURU: Karnataka chief minister Siddaramaiah endorsed the cause of the rural sector by writing to finance minister Arun Jaitley supporting the demand of an ongoing agitation seeking removal of GST on all goods manufactured in the rural areas essentially by the cooperatives sector.

His letter comes just a day after former Prime Minister H D Deve Gowda, his mentor-turned-foe, strongly expressed support for the demand made by an agitation of the Grama Seva Sangh (GSS) spearheaded by theatre person and activist Prasanna. Gowda, who called on Prasanna on Wednesday, strongly urged the activist to give up his indefinite fast that ended on Thursday with the CM’s letter and assurance of support.
The movement against GST on handmade goods has been on for the last three months, with traders and sellers in several places refusing to pay the tax as a form of satyagraha. Conventions and interactive sessions with the rural sector have been held in several places across Karnataka.

The agitation has been gaining ground and has also had strong political tones, particularly as Karnataka is preparing to face elections in seven months time. A 20 km padayatra was done from Jinjappanagudde in Tumakuru district to Kasturba Ashram in Arasikere of Hassan district to raise awareness of the seriousness of the issue in the rural areas.

Prasanna, whose six-day fast has been supported by several intellectuals, progressive religious leaders and activists including Girish Karnad, Ramachandra Guha, Prakash Rai, T M Krishna, M S Sathyu and Veerabhadra Chennamalla Swami of the Nidumamidi mutt, told ET: “I have ended my fast, but the tax-denial satyagraha will continue until the GST Council meeting on November 5. We will decide our future course of action after that.”

Siddaramaiah, in his letter to Jaitley, quoted a representation to the Karnataka government given by the GSS, where a committee headed by social scientist Ashish Nandy has given a definition of what is a “handmade” product and listed a range of them from handmade butter to handmade paper. He also endorses the demand to raise the GST exemption limit for individuals and self-help groups making handmade products to cover a turnover of Rs 50 lakh.

“This representation requires serious and urgent consideration and resolution,” the letter says, adding: “This would not only benefit a large segment of our rural population but would also give a boost to rural employment and sustainability. I, therefore, urge you to take this issue on a priority basis in the next GST council and decide favourably, benefitting rural artisans. I assure you of the government of Karnataka’s full support in this regard.”

Q and A with Prasanna:
Theatre person and activist Prasanna (66), who has been following the Gandhian way of life from a few years now, forced the Karnataka government to support his demand for exemption of GST on rural handmade goods sold through cooperatives by sitting on a six-day fast that he ended only after chief minister Siddaramaiah sent a letter to the Centre endorsing it. Three years ago, he did a similar fast in the textile hub of Gajend district of Karnataka, demanding facilities and support for the handloom sector. In a short interview to ET, he said such sacrifice was necessary to ensure the dignity to rural entrepreneurs.

Why did you do an indefinite fast, when the agitation seeking GST has already gained so much support?
Prasanna : It was absolutely necessary to do it, because this is a long haul struggle. You can’t do it the moderate way. One has to sacrifice for the cause, only then people will sit up. I had to suffer hunger so that the sorrow of the 60 percent of village folk is felt by the people.

What is the link between this demand to remove GST and the life of village people?
Prasanna : This is the first time since Independence that this sector has been subjected to tax. We are not paying it to protest and point out the very negative impact of such a tax on rural economy. These handicrafts and handmade products, whether it is slippers, pots or pappads, supplement the farmers’ income and help them sustain their lives. Our handicrafts and handlooms cannot compete with machine manufactured goods in the market. The atta that is sold by the farmer in a packet through cooperatives cannot be treated on a par with that manufactured by multinational companies and taxed at 28 percent.

Hasn’t the GST council already accepted your demand to exempt khadi?
Prasanna: Yes, but handmade products and handlooms are not just khadi. Khadi is just a part of these goods. The rest also have to be exempted. We will continue our tax denial satyagraha till the next meeting of the GST council on November 5. Traders in all places, in Gajendragad, Rabkavi-Banahatti, Chiknayakanahalli and everywhere are not paying the tax in protest. We have given a clear definition of what is a handmade product and we are seeking exemptions only for those that come under that category.

Will the GST exemption be enough to help rural economy?
Prasanna : Ours is a large demand. The removal of GST is the first step. We are asking for the poor to be given back to, for poor people’s products to be given a value. We want respect for poor through their own production. I want say that it is not only Tata or Birla, poor people are also entrepreneurs. It is not doling out freebies to them. We need to treat them as entrepreneurs and give them social justice at the marketplace.