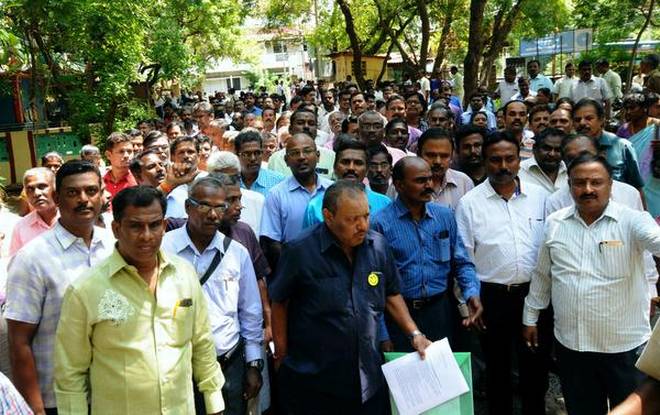 A few hundred accountants from Madurai, Theni, Virudhunagar and few other nearby districts petitioned the officials in Tamil Nadu’s State tax office and the Commissioner of Central Goods and Services Tax (GST) and Central Excise here on Monday alleging unfair imposition of late submission charges while filing monthly returns in the GST portal.

They also alleged difficulties in using the GST portal, which according to them was often inaccessible and not user friendly.

A.N. Subramanian, president, Madurai District Commercial Accountants Welfare Association (MDCAWA), who led the petitioners, said that the government had promised that no fines would be imposed for late submission of monthly tax returns for the initial three months of GST coming into force.

“However, when we are now trying to file the returns for the month of August, for which the deadline was September 20, it is automatically calculating a fine of ₹ 200 per day,” he said.

Stating that they had to submit the returns late only because of issues in the GST portal and lack of training on using it, he said that the fine amount worked out to more than ₹ 6,000. “For many of the commercial establishments we work for, this amount is more than the actual tax they had to pay. The businessmen are now shifting the blame on us, by stating that we should have submitted the returns on time,” he said.

Alleging that there were number of issues yet to be addressed on the GST portal, Mr. Subramanian said, “For instance, even if we make a minor clerical error while submitting the details for a month, we face issues while submitting details in the subsequent month. And there are no options to correct the clerical errors as well.”

“Also, for filing the quarterly details for the composition scheme under GST, the deadline was October 20. However, the respective form was not made available till now. After realizing this, the date has now been extended,” he alleged.

Requesting the government to do away with the late submission fines, he said that the officials here promised to forward the representation to the authorities concerned.