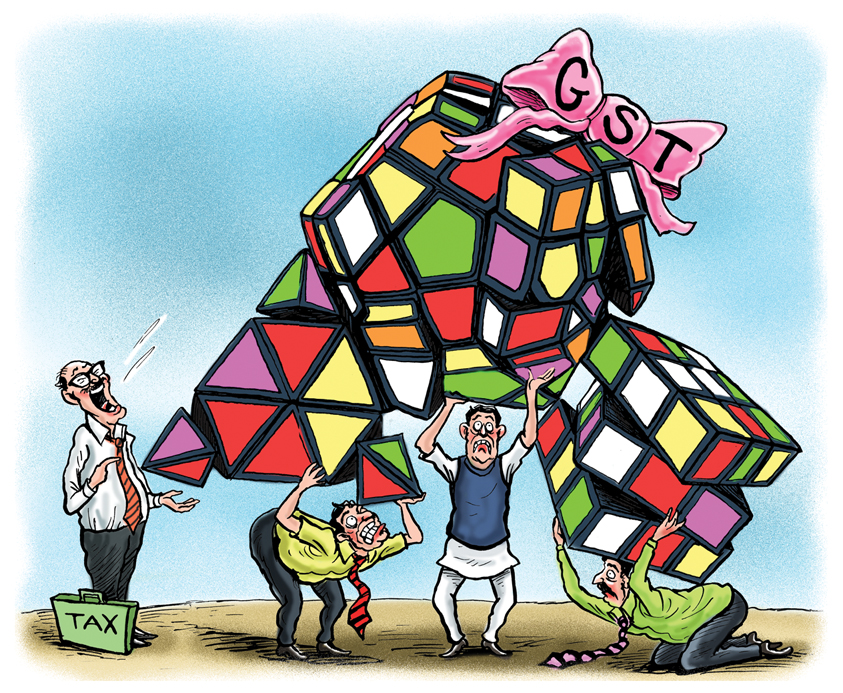 Confession: My brain is fried right now. Reason: I have spent the last several hours trying to figure out the Indian government’s GST return filing processes. I am still somewhat confused. This, when i have a business degree, worked at an investment bank for a decade and analysed hundreds of annual reports for companies.
Ask any tax expert in the country and they would agree. The GST puzzle is so complex it feels like a cruel and nerdy prank played by taxmen on India’s entrepreneurs. This would be funny, if only it wasn’t real, and didn’t threaten millions of businesses and jobs that go along with it around the nation.
The technically complex design of the GST returns process assumes every businessman in the country is an experienced munimji and entrepreneurs have nothing better to do (such as running their businesses) than fill out multiple GST forms in the form of puzzles every month. So while an American business may be figuring out how to make app-based sales or invest in new technologies, the poor Indian business is busy scrambling to figure out and meet three (yes three!) monthly deadlines for GST returns.
It is the classic case of tax nerds imposing something on helpless users, with no customer focus at all. The tax department continues to say they want to be more taxpayer friendly, but they always have an inward looking focus – evident in their process design that assumes advanced taxation expertise. Little wonder GST is fast becoming unpopular.

This is unfortunate because this tax reform actually has the power to change India. For a few silly reasons, stemming from sarkari attitudinal issues, the entire GST programme risks being sullied forever. The only silver lining is the GST council continues to meet and revise processes.
This at least shows a willingness to take feedback. If that is indeed the case, here are some practical suggestions to save GST’s reputation and India’s economy.
One, GST rates are too many. The more the rates, the more complex the forms and processes get, and the more discretion the authorities get to tinker around. This is the complete antithesis of GST. There needs to be only one GST, and an exempt list. If you are itching to have more rates, just have two. No more.
Two, the GST rate is too high. There are too many items in the 28% category, and even 18% is too much. Right now input cost GST reductions are not being passed to consumers, and probably won’t be for a few years. GST rates, hence, must be reduced a lot for the medium term. The government must note that for many who pay income taxes, GST comes out of post-tax income. To gouge people is to upset people. The ideal GST for the moment would be 10% flat for almost all goods, with a peak 15% for some if you must.
Three, the ‘pleasure equals more taxes’ attitude has to go. To tax things like air-conditioned venues or readymade garments more as they are luxuries is archaic, obsolete and fake-socialist. After all, people should be free to spend their post-tax income however they want. Should i sweat to deserve a lower GST? Really?
Four, GST returns are too complex. The government has an ambitious plan of tracking every invoice for every transaction for every business in the country and matching the GST collected and paid, every month. While this may be a dream for the tax department, it makes life super complicated for entrepreneurs, many of whom have never done such an exercise their entire lives.
A simpler method is to go by aggregate cash outflows and inflows of GST, and arrive at a net number, on a quarterly basis (unless a business specifically wants monthly refunds). In other words, a businessman says: I paid this in GST, i collected this much, hence the net amount due to/ from government is this much. That’s it.
Right now you have three returns a month, every month, with multiple complicated entries that have to be matched with every buyer and seller you did business with. Google the GST F5 form for Singapore, a simple quarterly online form with 14 boxes to be filled. It can be that simple. (Oh, and Singapore’s GST is 7% flat. Just saying.)
Finally, just do not have the attitudes of India in the 1960s. Which are (a) profits are terrible; (b) all businesses are run by crooks who we have to catch red handed; (c) running businesses is no work, so people can sit around and do returns all day; (d) we are government, so all businesses are beneath us – we tax guys being the colonial lagaan collectors for these uncouth thieves.
There is no reason to disdain or try and hurt Indian businesses. India’s private sector is our lifeblood. Without them, many Indian households would not be able to run. Take your taxes, but in reasonable amounts and in a simple manner. Don’t suffocate Indian enterprise.
The GST reform, when fully in place, can make India more competitive in the world. Right now, however, a modern reform is mixed with old-fashioned attitudes, and the latter risks taking GST’s reputation down. Hope the authorities address this, so they can truly celebrate and raise a toast to GST’s success (but don’t forget to pay GST on the toast).