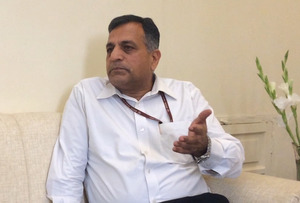 Days before his retirement on the coming Tuesday, Lavasa told Shantanu Nandan Sharma about the implementation challenges of the note-ban and GST, and their impact on the slowdown, before arguing why the economy had already bottomed out.
Demonetisation and the launch of GST happened during your tenure as finance secretary. In hindsight, do you feel the finance ministry could have implemented these far better?
As India is moving from a developing country to a middle income and developed country, there has to be a greater formalisation of the economy. Both these steps (demonetisation and GST) need to be looked in that backdrop. India can’t continue to have an overwhelmingly informal economy. So, when you try to formalise the economy, the greatest emphasis has to be on greater tax compliance.
But questions were raised on their poor implementation.
Demonetisation was a decision where there was an element of surprise. That was inevitable because one of the purposes of that step was to get hold of unaccounted money. So, there’s no way there could have been a forewarning. As far as GST is concerned, if the reform is so far-reaching in its nature, there are bound to be some issues in its implementation.
There were arguments that the government could have waited. But let’s not forget that the GST as an idea existed for almost 15 years. So, at some point, the government needed to take a call on the deadlines. It’s like building a house. However meticulous your planning could be, you will notice some of the difficulties only when you move into the house. The same is the case with this enormous reform exercise with which the tax in the country is harmonised, with much more compliance.

Almost a year after demonetisation, can you disclose who were the select few who knew about the move before it was rolled out?
The entire exercise of demonetisation involved a lot of detailing. It did involve organisations that were to play a part. Yes, there was a group of people who discussed the issue and planned how to roll it out before specified notes were declared illegal tenders.

I won’t press too much, but as the finance secretary, were you aware of it?

At the end of the day, what has demonetisation actually achieved?
The unaccounted money has come back to the system. The money is now available in the banking system, and is accounted for. This is a mechanism to find the black money in the system. Those who deposited big money (cash) need to answer the tax department’s queries on how they had acquired it. To that extent, yes, demonetisation is a step forward.
In the last one month or so, there has been major criticism of the finance ministry for the way it’s handling the economy. GDP growth, for example, is declining…
If you carefully analyse the trends in the global economy, of which India is a part, the growth rate peaked in 2015-16. And, then, there was a slide from the last financial year (2016-17). It’s not that the decisions taken in India contributed to it. It’s a global trend.
Are you then suggesting that the demonetisation and GST had no impact on India’s declining GDP, particularly when it slowed down to 5.7% in the first quarter of the current fiscal year?
In the first two quarters of 2016-17, there could not be any impact of demonetisation. But you could gauge there was already a de-acceleration. We found exports were impacted because of depressed demand. Yes, demonetisation has had some impact on GDP growth. Our economy is still largely informal and it depends on cash. So, all those who were primarily dependent on cash were affected. And that impact was seen in the fourth quarter of 2016-17 and the first quarter of 2017-18.

But the data that we have been receiving and which is also in the public domain clearly shows remonetisation was more or less completed by April 2017. That means sufficient currency was in circulation by then. But, as this was happening, the certainty about GST came to be known. So, a lot of de-stocking took place in the first quarter, and that also contributed to the slowdown.
Is the economy recovering?
We feel the bottoming out has already taken place. The data that came in the second quarters suggests there has been recovery in certain sectors. Exports, for example, have picked up considerably. All the agencies — the RBI, IMF and the like — that track GDP believe that India’s growth story has been on an upward trajectory. Soon, we will reach the 8% GDP mark.

Finally here’s a personal question ahead of your retirement next week. In government circles, you are also known for your photography. Are you turning into a professional photographer now?
On the personal front, my photography has been a matter of great satisfaction. I will keep pursuing it. I am not one of those who believe that one can’t pursue personal interests because of lack of time. There is always enough time to do what you are interested in. Apart from photograph I read a lot of books; I play both tennis and cricket; I go mountaineering; I river-raft. I hope all of these will continue (after retirement). Also, I will continue to be interested in public affairs.