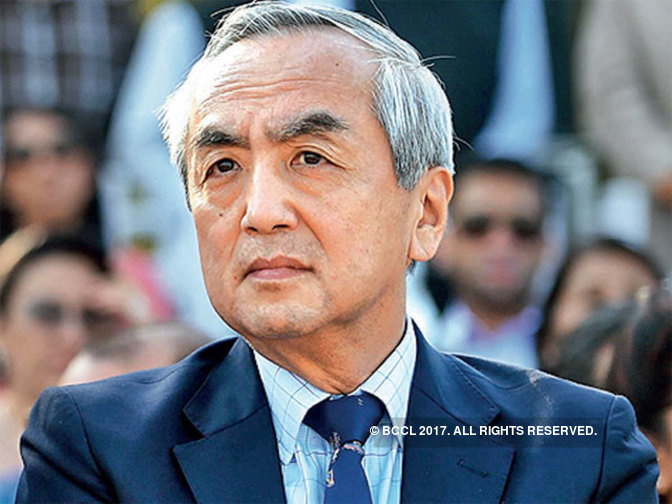 Japanese ambassador Kenji Hiramatsu said on Friday that the business community was excited about India adopting an “advanced and simplified” tax system GST which “may have hiccups in the first phase of implementation but is good for business in the long run.” Speaking to ET, he said, “the entire Japanese community welcomes GST as it simplifies taxation, makes transport of technology and resources easier.”

The Opposition for the last few months has been attacking the government on implementation of GST. Congress VP Rahul Gandhi had recently said the GST is a “good idea” that has been “destroyed” by the Modi government. He had also criticised PM Narendra Modi, saying he didn’t understand the pain he caused the nation.
Hiramatsu, however, said the Indian government was bringing in continous reforms and GST was just one example of that. Commenting on India jumping 30 spots to number 100 in the latest Ease of Doing Business report, Hiramatsu said Japan was pleased to see the progress and agreed that in the last few months there has been a fresh look at investments.
The ambassador also said Japan’s move to train Indian youth was a “winwin situation for both India and Japan” considering India had a massive pool of young talent and Japan had an ageing population but a vast resource of technology and experts. The ambassador said there are four Japan Institute of manufacturing in India and two more will be added soon.
Recently, Union minister Dharmendra Pradhan had said that India will send three lakh youth to Japan for on-job training for 3-5 years as part of the skilling programme and Japan will bear the cost of the training. The union Cabinet has already approved signing of memorandum of cooperation between India and Japan on the ‘Technical Intern Training Program’.
“Japan has technology and senior experts who are willing to transfer technology to the next generation. Japan has always been interested in financing infrastructure and technological needs of countries, especially India. Half of India’s population is young.We want to make use of the talent and provide necessary financing and technology,” the ambassador said, adding a host of big companies are regularly inviting trainers and experts in Japanese technology.
“To start with, 15 Indian youth will be trained in the manufacturing of electric products after we will take it forward. We will be training more in many more sectors as we plan out the programme systematically. We want them to be received well and located in places closed to companies where they work. Apart from that we plan to invite Indian young workers to Japan to undergo training.”

The ambassador also said bullet train will bring in a new culture of rail safety in India as “shikansen operational since 1964 in Japan has not seen a single accident.”

The Japanese government has agreed to fund most of the $17b needed for the project.

Recently, Prime Minister Narendra Modi and his Japanese counterpart Shinzo Abe laid the foundation stone for India’s first bullet train project in Ahmedabad on Thursday. The much-touted rail project, which will reduce travel time (from seven hours to about two hours) between Mumbai and Ahmadabad and spur economic growth in the region promises to transform railways and ‘create new India’.

Hiramatsu said delegation from Japan have had intensive discussions with Railway minister Piyush Goyal and other officials and were looking at more one-to-one discussions to see how this can be taken forward. “We are aware that India is keen on adopting an advanced rail safety model. We have a sophisticated rail safety system in Japan which we are happy to transfer to India.

Japan is interested not only in Shikansen but also in providing high class technology to the rail network in India. We have invited 20 companies that have accumulated technology in braking, track safety, signalling to see the technology to look at the standard of safety.”
“When the shikansen was started, I was just eight years old and I still remember the excitement. Shikansen was a dream that brought to Japan high level, high class technology with high speed, I am sure it will be the same for India too. It will change the culture of rail safety in India, prevent unpredicted rail accidents and we are confident it will provide economic benefit to people, jobs also,” the ambassador said.

Hiramatsu said more collaborations with India start-ups is what Japan is looking at right now. “Traditionally our investments have been in manufacturing but we are expanding that. We are interested in the financial sector, IT, retail, lifestyle – we are happy to see new shop – Muji that sells stationery to household items and apparel. It is a very fashionable brand and it is now available in India. It shows Japan’s sophistication and design, he said.”
Japan currently ranks as the third biggest investor in India and highest investor as the single country source. Japanese FDI into India has largely been in automobile, electrical equipment, telecommunications, chemical and pharmaceutical sectors.