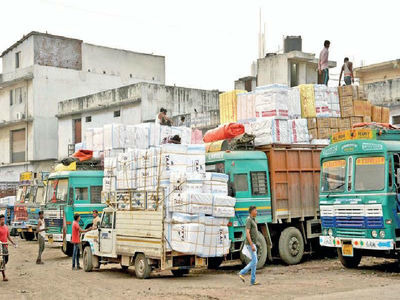 NEW DELHI: The Gujarat 2017 assembly election has all the ingredients to become the proverbial ‘semi final’ in the lead up to the 2019 general elections. The imposition of the Good and Services Tax (GST) has emerged as a significant poll issue in Gujarat, as the state’s famed ‘baniya’, or trader, group appears to be irked at the economic slowdown it has caused.
The Congress party is hoping to leverage the discontent in its bid to breach the Gujarat citadel for the first time in 22 years. The BJP on the other hand, saw the writing on the wall early into the GST regime, has sought to soften the blow by trimming tax rates on many items specific to Gujarat.
Soon after the GST rollout on July 1, a number of trader organisations took to protests, the one by textile traders of Surat was especially significant. Congress Vice President Rahul Gandhi, whose social media presence has been in the news recently, made good use of the momentum, taking potshots at the new tax regime terming it as ‘Gabbar Singh Tax.’

Finance Minister Arun Jaitley soon matched shot for shot as he retorted saying, ” Those who are used to monumental scams in 2G spectrum and coal allocation will have objections to legitimate tax.”
The BJP walked the talk exactly a month ago on October 7, as the GST Council trimmed the tax rates on 27 items, quite a few of which have bearings in Gujarat’s karobaar. Taking note of the textile traders’ dissent, sewing thread of manmade filaments and thread of manmade staple fibres; synthetic filament yarn (nylon, polyester); and artificial filament yarn such as viscose and rayon, as well as yarn of manmade staple fibres, were all brought under the 5 per cent slab from the previous 12 per cent. A similar change was made for the rate for food items such as khakhra (a popular Gujarati snack), as well as for categories of namkeens. Moreover, a number of relief measures were brought forth for exporters. Later in the month, a day before the Election Commission revealed the dates for the Gujarat polls, the Vijay Rupani government waived the GST on micro irrigation equipment.

Congress though is yet not giving up on the GST plank, as Rahul Gandhi is expected to meet small traders on November 8 , the first anniversary of demonetisation, which his party has termed as ‘Black Day’. Incidentally, he had addressed a rally in the textile town on November 3.
BJP too will still be circumspect of the winds of change. The Patidar community comprising the Patels form a major chunk of traders in Gujarat and constitute 12 to 14 per cent of the votes. The community which has historically pledged its support to BJP, has bargained with the state government for reservation demands in the last couple of years. Led by Patidar Anamat Andolan Samiti (PAAS) leader Hardik Patel, this is a vote bank which BJP seems to be losing and Congress is making full use of the opportunity by pitching GST as a further deterrent to their interests.