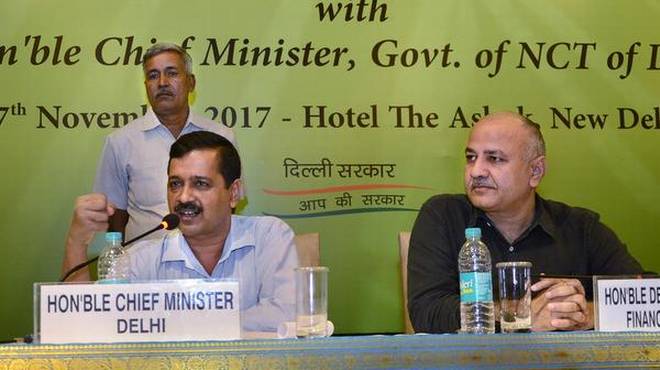 Chief Minister Arvind Kejriwal on Tuesday blamed demonetisation and the Goods and Services Tax (GST) for “job scarcity” and the economy having reached a “sad state” on the eve of the scheduled observance of ‘black day’ by the Opposition to mark the first anniversary of demonetisation.

Addressing a traders’ meet on GST, Mr. Kejriwal also demanded that the Centre abolish 28 and 18% tax slabs in the new tax regime further, stating that only the 12% slab should exist on every item.

“A situation of job scarcity has arisen as the economy is in a sad state and recession has taken place. Everybody is saying that the two reasons behind this are demonetisation and GST in the last two years,” Mr. Kejriwal said.

While interacting with traders at an event organised by the Aam Aadmi Party (AAP) Delhi government in relation to ‘GST Market Support Committees’, the Chief Minister asked market associations to create WhatsApp groups in their respective areas to share their concerns which would later be raised in the GST Council meeting by Deputy Chief Minister Manish Sisodia.

“We don’t want closure of trades due to the GST in Delhi. I ask you (the traders) to approach the government if we can do something for you. The Deputy CM will raise all your issues at the GST Council meeting,” he further said.

Alleging complexity in the GST structure, Deputy Chief Minister Manish Sisodia said that the issue of traders should be addressed immediately. “There is a lot of complexity in GST. If it is not removed, the situation would deteriorate,” said Mr. Sisodia, who also holds the finance portfolio.

He further argued that there was a need to ensure that GST returns were allowed to be filed quarterly irrespective of the annual turnover whether it was over ₹1.5 crore or less.

In addition to this, he demanded that articles of daily use such as toys, chocolate, cement, auto parts, two-wheeler parts, furniture, hardware and bathroom fittings, electrical items be removed from the luxury slab category of 28% tax, adding that he would raise it in the GST Council meeting.