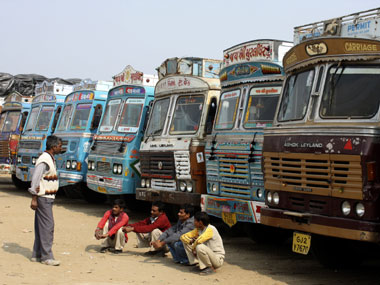 The roll-out of Goods and Services Tax (GST) has not translated to a significant saving on time for truckers doing inter-state goods transfers, according to a survey by CRISIL Research.

States are allegedly using flying squads to ‘stop vehicles on highways or at dismantled check-post zones to scrutinise the goods being transported, in an apparent attempt to corroborate their GST revenues’.

Before the advent of GST, a typical freight truck plying on national highways crossed a state check-post once in two days, given an average speed of 35 km per hour in India, and an average daily driving distance of 300 km. In other words, extrapolating from the above known stats, a freight truck travels for 8.5 hrs a day.

Post the GST implementation, the survey finds that truckers gain only about 90 minutes in travel time.

Since the advent of GST, trucks are plying an average 25 km more every day (90 minutes gained x 35 kmph every two days), or around 325 km per day. The 90 minute gain translates to about 10 hrs a truck driver covers a day. It follows now that the truck travelling at a speed of 35 km/hr speed for 10 hrs a day will be doing 350 kms on an average. Taking the average daily distance covered as 300 km, in the post GST scenario, a truck driver does about 325 kms a day.

That’s still 20 percent lesser than the 400 km per day estimated before the implementation of GST.

Trucks before the implementation of GST spent 3-6 hours at one check-post to get documents verified, goods vetted and freight weighed by the state apparatus. This waiting time varied wildly across India, from a staggering 24 hours to as little as 20 minutes.

But since the implementation of GST on July 1, 2017, and with check-posts removed, there hasn’t been a significant speeding up of transport times. “Crisil Research’s interactions with fleet operators and own calculations show that the net gain, at best, is only of around 90 minutes. Reason? Suspicious states, which now have to depend on the Centre to get their share of GST revenues”, said the report.

In July the Road Transport Ministry claimed that the travel time for long-haul trucks reduced by a fifth post the removal of inter-state check points. A truck in India runs an average of 60,000 kms every year compared to 200,000 kms in the West.

Prasad Koparkar, Senior Director, CRISIL Research: “Apart from this, there’s an unintended consequence, too: while trucks are reaching their destinations faster than before, their wait for freight has become longer because there isn’t a significant and concurrent increase in demand. This is leading to a fall in the utilisation rate of trucks, which, in turn, impacts demand for new trucks.”

That’s because fewer trucks are now required to move the same amount of goods because of the increase in the daily distance covered and a lack of material growth in freight demand.

The Ministry had said trucks earlier took 50-65 hours in reaching Kolkata from Chennai and the revised travel time stood reduced by 20 percent. This was corroborated from interviews with transporters as well as GPS data of express transporters.

“Another fallout has been on truck dealers. Before GST, OEMs used to transfer a majority of their new trucks to their regional stock yards and a few to dealers in order to avoid Central Sales Tax (CST). OEMs have now started directly billing dealers for most of their sales. While this is a positive for OEMs because it reduces their working capital requirements, for dealers it is a negative for the opposite reason”, said the Crisil report.