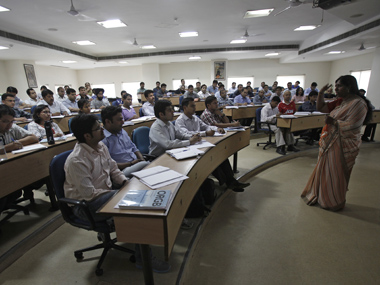 Did you hear the lofty speeches on how India is on the cusp of reaping demographic dividend? However, If you were to judge based on the way policy makers and the GST Council decided, you will give up any hope. For a government which is supposed to invest in education so as to enable that ‘dividend’, we have come far.

– transportation of students, faculty and staff

– catering, including any mid-day meals scheme sponsored by the Government;

– services relating to admission to, or conduct of examination by, such institution.

Till March 2016, an “Educational institution” means

i) An institution providing services by way of Pre-school education and education up to higher secondary school or equivalent;

ii) Education as a part of a curriculum for obtaining a qualification recognised by any law for the time being in force;

iii) Education as a part of an approved vocational education course;

All this changed in February 2017 through a sinister notification in preparation to GST. It removed higher education from the original definition of ‘Educational Institution’. Now, exemption even in respect of the above 6 services has been further curtailed by excluding everything other than pre-school education and education up to higher secondary school or equivalent.

The new clause says “Provided that nothing contained in clause (b) of this entry shall apply to an educational institution other than an institution providing services by way of pre-school education and education up to higher secondary school or equivalent;” This essentially meant that all higher education institutions were brought under the service tax net.

Why would a government differentiate between school education and college education for GST purposes is any ones’ guess? For a nation that is hungry to create more employable workforce and higher Gross Enrollment Ratio (GER), this defies logic.

And the result of this change is burdening the student. It is to pursue higher education that students go out, stay in hostels, eat at a mess, travel by bus. And all these are now charged at 18 percent GST, if such services are from outsourced companies. IIT Kanpur had advised that students appearing for JEE Advanced will pay GST. One must remember that institutions because of the size and scale always seek out service providers for most services. Academic institutions must focus on teaching than trying to perfect maintenance, security, housekeeping, hostels etc. If education is indeed to be run as ‘Not for profit’, then it defies logic that we tax it too.

India has always been a laggard in terms of investments in higher education. Since 2004, we invested about Rs 5.76 lakh crore (3.82 percent) against the stated objective of 6 percent. Even of this investment, about Rs 2.45 lakh crore was cess collected from us. In fact, 1 percent on all taxes were imposed to fund secondary and higher education. However, higher education spend in the last decade has been just about Rs 1.76 lakh crore against a Total cess collection for higher education of Rs 86,537.55 crore. If you look only at the plan expenditure, the government’s invested just about Rs 15,500 crore (beyond the cess collected) in expanding capacities. That is just Rs 1,500 crore each year to serve the increased student needs. The government has simply abdicated its responsibilities of investing in education to reap that dividend.

And these numbers just about tell us the apathy of all governments when it concerns higher education. The imposition of 18 percent GST on higher education is just symptomatic of why India reaping demographic dividend will remain a pipe dream. Because dividend is not an entitlement unless the right investments are made. And we have now come to a stage where we are trying to make money from the students instead of subsidising education or investing in our youth to make them employable and productive.

Would the GST Council stand up for the student? Would it make a small beginning by exempting Education from GST and enable India to reap the demographic dividend?