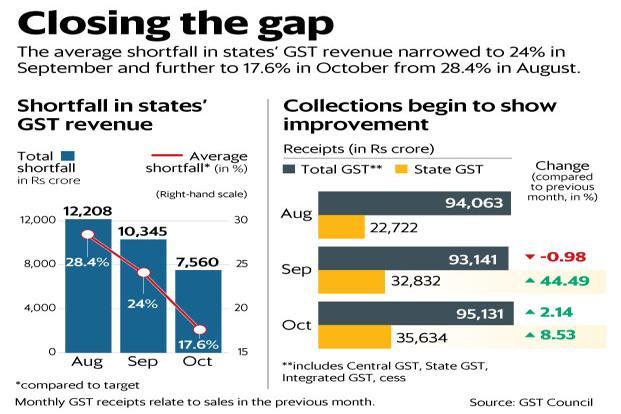 New Delhi: The initial revenue shock following the rollout of the goods and services tax (GST) seems to have abated, with states steadily improving collections aided by relaxations in deadline, waiver of late payment fee and steps to encourage compliance, showed data from the GST Council.

Average shortfall in GST revenue collected by states narrowed to 24% in September and further to 17.6% in October from a high of 28.4% in August, supporting the optimism of state finance ministers that revenues will stabilize further in coming months. Monthly GST receipts of states relate to sales in the previous month.

GST, aimed at creating a common nationwide market by scrapping a web of local taxes, has seen a series of tweaks since it was implemented on 1 July, with the most comprehensive changes announced after a GST Council meeting on 10 November when it slamshed taxes on as many as 200 items to ease the burden on businesses, relaxed penalties and made it easier for small businesses to comply.

The changes are expected to cost the Union and state governments Rs20,000 crore a year.

“The tax rate cuts may cause a revenue shortfall initially, but if the demand for such products as well as compliance by businesses pick up, it could help to offset the revenue loss over a period ,” said R. Muralidharan, senior director, Deloitte India.

But even before the latest tax cuts were announced, the combined central and state GST revenues, including cess, recovered from the blip seen in August.

In October, the combined GST revenue was Rs95,131 crore, up more than 2% from the preceding month.

State GST receipts rebounded with a growth of over 44% in September from the previous month and increased further by 8.5% in October to Rs35,634 crore. The total state GST target is roughly Rs43,000 crore a month.

The problem of revenue shortfall is acute in the case of Puducherry, Uttarakhand, Himachal Pradesh, Chhattisgarh, Bihar and Goa.

The waning effects of the slowdown in production because of uncertainties related to GST introduction in July is aiding the improvement in revenue growth. Economists say the slowdown in economic growth seen in the June quarter—to a three-year-low of 5.7%—has already bottomed out.

Another reason for revenue improvement in September is the remittances from small businesses which are required to file returns and pay taxes on a quarterly basis under a special window for them called the composition scheme.

GST proceeds do not include tax collection from items such as select fuels, liquor, electricity and land that are kept outside the indirect tax. Basic customs duty levied by the Union government is also outside of GST.

The indirect tax reform held the promise of widening the tax base and make taxation more transparent but the sophisticated IT-driven processing of returns envisaged in GST has made compliance tough for many small businesses, which prompted the GST Council to continue some pre-GST era schemes for exporters and suspend the rigorous matching of invoices from suppliers and buyers till the end of the current fiscal year.

At its Friday meeting, the council also reduced the late payment fee for those filing “nil tax” return to Rs20 from Rs200 earlier. For the July-September period, the fee was waived earlier.

A state finance minister, who spoke on condition of anonymity, said that the major jump in the tax base that will be visible in the near future will be in direct taxes as more small businesses and traders start disclosing their revenue and pay income tax.