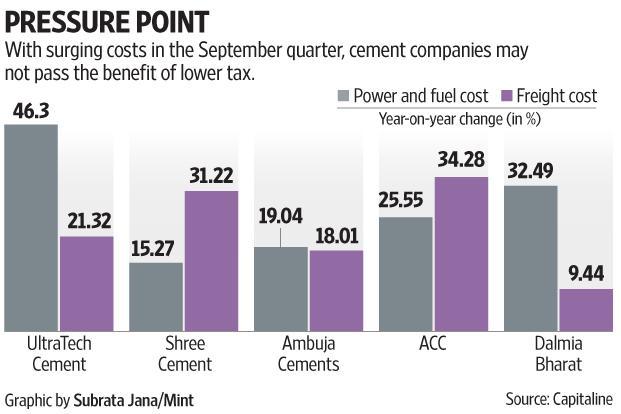 Given the government’s thrust on schemes Swachh Bharat, Housing for All and other infrastructure projects, cement companies were anticipating a reduction in the goods and services tax (GST) rate to 18%, a hope dashed when the GST Council at its meeting last week retained the 28% tax on the sector.

While the Cement Manufacturers’ Association is disappointed at the decision, the move has not come as a surprise to sector analysts. According to them, since cement was among key revenue generators for the government through indirect taxes, a reduction in the GST rate was unlikely. A media report points out that cement and paint would have cost the government more than Rs20,000 crore had these been moved to a lower tax slab.

It should be noted that GST implementation was largely tax neutral for cement companies because in the pre-GST regime, indirect taxes levied added up to around 28% or a tad higher.

However, the GST rate on fly ash and fly ash aggregate with 90% or more of fly ash content was reduced from 18% to 5%. Fly ash is used as a supplementary material in the production of portland pozzolana cement (PPC), which is mainly used in construction works.

This comes at a time when elevated costs continue to erode margins of cement makers. Rising petroleum coke and diesel costs pushed power, fuel and freight expenses higher for most cement producers in the September quarter.

Sharing a similar view, Binod Modi, analyst with Reliance Securities Ltd, said, “Proportion of PPC production varies among cement companies. At an average fly ash cost of Rs600/tonne, a cement company can potentially save around Rs20-25/tonne at 100% fly ash based PPC.”

The price of fly ash varies across the country since it is settled between different buyers and sellers at different prices. To procure fly ash, cement companies either have to enter into short-term contracts of around six months with power firms or get it via auctions.

Going by the anti-profiteering rule under GST, the benefit of lower tax should be passed on to consumers in the form of reduced prices. But cement prices may not soften in the near term. In fact, according to analysts, to mitigate the impact of higher costs on margins, cement makers could resort to price hikes.

Meanwhile, cement demand across the country remained subdued in the September quarter, which is a seasonally weak one. In the second half of the fiscal year, hopes of demand revival are pinned on government spending on infrastructure and affordable housing projects.