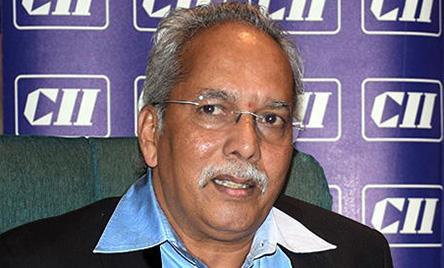 It is a big relief for most of the industry . But for 15 per cent of the products, the rate continues to be 28 per cent. “We will seek reduction for those products too.” . Pre-GST duty was under 20 per cent, he said.

Sundaresan told BusinessLine that sales declined 35 per cent in July due to GST implementation. However, things returned to normal and the overall growth was not affected as the industry grew 19 per cent in Q1 and 22 per cent in Q2. And the industry will sustain this in the current fiscal.

So far, only road construction has driven growth, but the Railways has also started to offer some opportunities.

“Leasing will become cheaper post-GST. Earlier, they had excise duty and sales tax, and on top of that service tax . The total rate worked out to 30-32 per cent.Now, leasing companies will charge only 18 per cent GST. So, it will benefit them a lot.”

Sundaresan felt that till full clarity is achieved on GST, the government should allow the industry to correct its mistakes, instead of penalising.

Referring to EXCON 2017, the 9th International Construction Equipment and Construction Technology Trade Fair, to be held from December 12 to 16 in Bengaluru, Sundaresan, who is a member of the event committee, said this year’s edition will be one of the largest fairs with a display area of 260,000 sq metre.

“We expect more than 1,000 exhibitors, including 300 companies from abroad. It is expected to attract about 50,000 visitors. Key objectives are to promote Make in India, skill development and component manufacturing.”