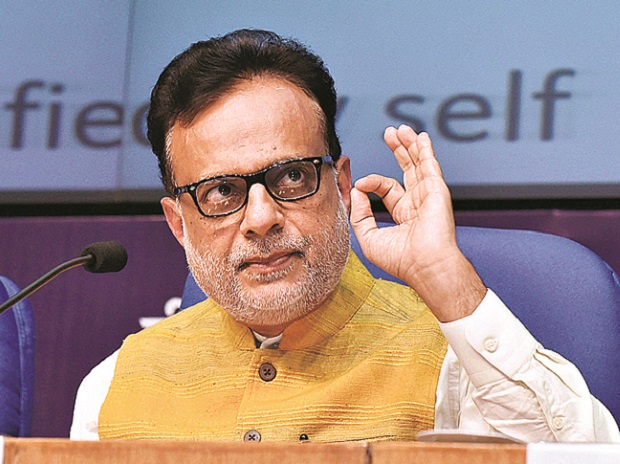 Companies, including FMCG firms, might be prosecuted if their retailers do not immediately cut the prices of products whose goods and services tax (GST) rates have been slashed.

Union Finance Secretary Hasmukh Adhia says the retailers or the companies cannot continue with higher prices on grounds that the old stocks have not been exhausted.

“We have made provisions for the companies to claim the difference from the government as input tax credit. But I am not willing to accept their argument to postpone passing on the benefits to consumers till they have disposed of their old stocks.”

According to him, the new prices should be effective from November 15.

The GST Council in its last meeting this month cut the tax rate on 176 items from 28 per cent to 18 per cent and on two to 12 per cent.

There was a huge demand to make these cuts. Speaking in a Doordarshan interview in which Business Standard was present, Adhia, who is also revenue secretary, said it was inconceivable that a 10 per cent cut in the price of, say, detergent products should be minuscule for consumers.

“We cannot track each retailer. So we have made it clear to manufacturers like FMCG companies that the onus is on them to ensure the retailers immediately pass on the benefits to the consumers if they want to escape action under the anti-profiteering clause of the GST.”

He advised companies to “transparently” advertise in newspapers by how much their prices had come down. Items on which tax rates have dipped include detergents, sanitary ware, suitcase, beauty products, chocolates, marble and granite, wall paper, plywood, and stationery articles. Making the changes in prices visible would be a measure of their standards of corporate governance. “It is the responsibility of companies to inform their supply chain about the new price, going all the way down from distributors to wholesalers and retailers if they wish to escape the glare of anti-profiteering action by the government.”

He added that the ministry of consumer affairs given manufacturers the elbow-room to alter their maximum retail prices till December.

“But this does not mean they can wait till December. The new prices have to become effective immediately.”

Last Thursday the Union cabinet cleared setting up a national-level anti-profiteering authority. In the three-level authority complaints of local nature will be sent to a state-level screening committee. Those with inter-state ramifications will travel to a standing committee set up at national level. This committee, if satisfied, would refer cases for investigation to the Directorate General of Safeguards, which will send its report to the authority. It will have a sunset date of two years from the date the chairman assumes charge.

The categorical assertion by the finance secretary follows plenty of feedback that the rolling out of the GST on July 1 has not led to any reduction in the prices of goods and services. A reason given is the apparently high tax slabs, which has left little room for manufacturers and service providers to cut prices. Taking note of these, the last GST Council meeting, which brings together the finance ministers of all states along with the Union finance minister, cut rates, made eating out cheaper by cutting the tax on restaurants irrespective of size to 5 per cent, and eased compliance requirements on trade and industry to file returns.

Clarifying the air about the new rates for restaurants, he said most of them, especially the smaller ones, did not need to avail of large sums as input tax credit. “It made sense to take them out of the input tax credit chain. I would expect very few claims to emerge from there for anti-profiteering action. Competition should take care of anyone who tries to spike prices.”

Speaking about the larger adverse impact of GST rates on the Centre’s tax collection, Adhia said he was confident that the numbers would hold up for the Budget. Referring to the upgrade of India’s sovereign rating by Moody’s, which has endorsed its fiscal marksmanship, he said it would be necessary to watch the trends in the three GST taxes — the integrated goods and services tax, state goods and services tax, and central goods and services tax — till the end of December to make a call. “I am confident we shall do well.”

A reason for his confidence is that almost all the pending tax returns for July have been filed.

“The numbers for August are closing in and now September too has turned every encouraging.” The government had given extra time to businesses for filing their tax returns so that they could become conversant with the requirements. As a result, the pace of filing returns had slowed considerably.