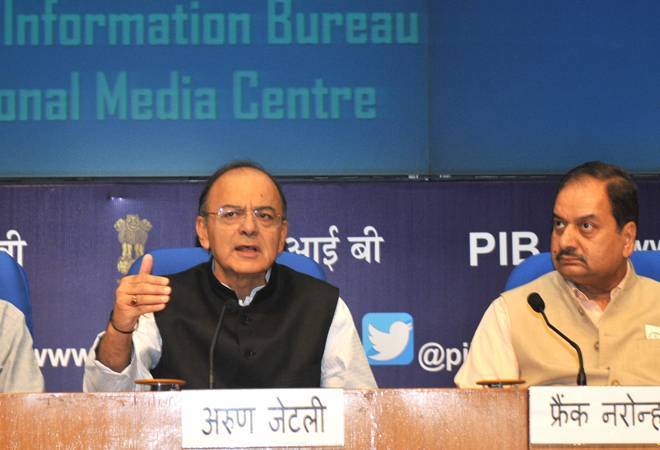 Surat: Union Finance Minister Arun Jaitley on Sunday met representatives of Surat’s textile industry and assured them that the Centre will look into their concerns.

Jaitley’s outreach to Surat textile traders comes ahead of polls. Congress vice-president Rahul Gandhi had spent a full day, November 8, the first anniversary of demonetisation, here and had heard the problems of the textile workers.

Surat textiles industry body made representation before the finance minister seeking ease in procedures related to Goods and Services Tax (GST). Both the association and Jaitley said that the meeting was positive.

Jaitley, who was here to attend the BJP’s ‘Mann ki Baat – Chai Ke Saath’ programme, took time out to meet the textile traders and heard their concerns regarding the provisions in GST which they said was hurting the industry. Jaitley said the textile industry in Surat is “very positive about government’s economic policies and supports GST.”

He added the industry has demanded that the procedures should be made simpler, especially for small textile industry, and he has invited their representatives to meet concerned officials in Delhi to sort out their problems.

“I am happy that the textile industry of Surat, which is very progressive and which has made a name for itself in the entire world are very positive about government’s economic policies and are in support of GST,” Jaitley told reporters.

“They expect the procedures should be made simpler, especially for small textile industry, so that they are not overburdened with procedural compliance. I have invited a small representatives in Delhi and put their facts before the concerned officials. The GST Council is trying for the same and we will also certainly do our best,” he said.

He further said he was happy that GST Council has solved issues raised with “historic tax reforms”. “Other countries have praised India for addressing issues regarding GST at a very fast pace,” he said.

Talking to PTI, president of Federation of Surat Textile Traders Association Manoj Agarwal, who made representation before Jaitley, said, “We told Jaitleyji that Surat’s textile industry is badly hurt due to GST and asked him to address our problems. We said we want GST, but we are not able to follow GST rules.”

“He assured us to solve our problem and asked four of us to meet him in Delhi regarding this along with Surat MP Darshanaben Jardosh who was also present in the meeting,” he said, adding the meeting was attended by around 300 textile traders and members of the Association.

“We are glad that the finance minister listened to our concerns and assured us that he will try to address them. He even invited us for discussions. We have made several representations before as well but this meeting was very positive, may be because of the upcoming elections,” he said