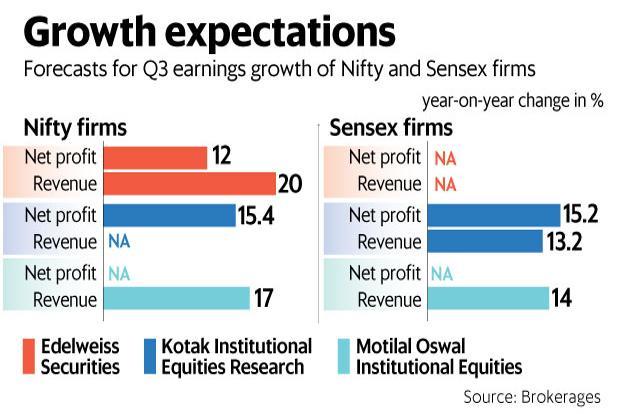 Mumbai: The first signs of a rebound in corporate earnings growth will likely be visible in the December quarter due to the favourable effect of a low base a year ago and higher consumer spending in the festive season, analysts say. The earnings will also indicate whether the disruption caused by the implementation of the goods and services tax (GST) on 1 July has receded.

The 8 November 2016 invalidation of high-value bank notes squeezed consumption in the third quarter of 2016-17, hitting sales and profits of companies.

In the three months ended December 2016, aggregate sales of Sensex companies grew by 3.8%, Ebitda by 7.7% and net profit by 1%. For Nifty companies, sales, Ebitda and net profit grew 4.9%, 9.6% and 10.3%, respectively. Ebitda—or earnings before interest, taxes, depreciation and amortization—is a measure of operating profitability.

A boost to consumer demand from festivals, including Dussehra in September and Diwali in October, should also help companies post higher sales and profit growth, analysts said. The rupee’s appreciation may, however, hurt the earnings of exporters, and higher commodity prices may take their toll on the margins of packaged consumer goods makers.

According to Edelweiss Securities Ltd, a recovery in company earnings will gain momentum on the back of the low base effect and the fading impact of GST-related disruptions. Edelweiss estimates Nifty companies to report revenue, Ebitda and net profit growth of 20%, 12% and 12% year-on-year (YoY), respectively, in the quarter from a year ago, implying 4% earnings per share (EPS) growth in the first nine months of FY18.

“While earnings growth is improving, Q4FY18 asking rate (to meet full-year forecasts) is still high, implying potential downgrade risk. For FY19, Nifty growth is forecast to be 22-25%,” the research firm wrote in a note on 5 January.

Analysts are concerned about the impact of rising oil and commodity prices that could hurt the margins of consumer companies. Rupee appreciation could take its toll on export-oriented sectors including information technology and pharmaceuticals. Brent crude prices jumped 16.21%, the rupee gained 2.2% and the Bloomberg Commodity Index rallied 4.39% in the three months ended December. Elevated bond yields, which will dent treasury income, and higher bad-loan provisions may hurt banks, said Dhiraj Sachdev, vice president and senior fund manager, HSBC Asset Management.

“Earnings growth is likely to be over 20% in FY19 for broader indices. GST fallout on growth in first half will sustain downgrades for FY18 earnings estimated at the beginning of the year. However, this should recede with possible upgrades on cyclical recovery in FY19,” Sachdev added.

Earnings revival is critical for the rich valuations of Indian markets to sustain. Currently, the Nifty is trading at 18.95 times its expected earnings for the current fiscal. Bloomberg data shows Nifty companies’ consensus earnings per share forecast for the current fiscal has fallen 8.5% since April; for fiscal 2018-19, it has been cut by 3.3%.

Though the Indian markets were among the best performers of 2017, with the Sensex gaining 36.02% in dollar terms, high valuations amid continuous earnings downgrades may dam the flow of liquidity which drove equities to record highs last year.