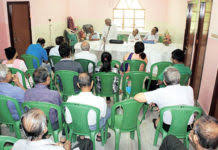 GSTBA members from across the state, including Surat, attended a meeting here on Thursday to discuss the next course of action against the Centre.

Tax consultants unanimously decided to launch an indefinite strike against the central government for its failure to resolve the technical glitches of the GST portal. Consultants stated that the extension of dates for filing the GSTR-1, GSTS-4, ITC-01 and TRAN forms due to the problems in the portal is not going to serve the purpose. The consultants and tax assessees in Gujarat are looking for a permanent solution for easy filing of the GST returns on the portal.

GSTBA secretary Prashant Shah told TOI, “Before Gujarat assembly elections, we had met the chief minister and he assured us to resolve the issues related to GST and the portal. We had called off the agitation based on chief minister’s assurance. Now, we are again meeting him on January 16 in Gandhinagar for a final discussion before launching the strike.”

Shah added, “The business community in Gujarat is feeling harassed and mentally tortured due to the technical problems in GST portal. The last date of filing of the GSTR-1 was extended till January 10, but still the users are not able to upload their returns on GST portal due to the glitches and they will have to pay Rs 200 per day for late filing.”