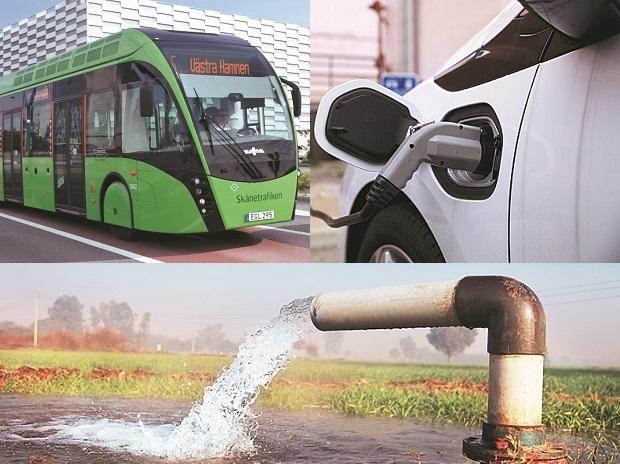 The GST Council may take up rationalisation of the goods and services tax (GST) rates for a handful of items at its meeting next week. These items include bio-diesel buses, electric vehicles and irrigation equipment.
The GST Council meeting will be its last one before the presentation of the Union Budget on February 1.
The relatively small list for rate reduction was finalised by the fitment committee earlier this week and may be taken up by the GST Council, which is headed by Finance Minister Arun Jaitley and comprises state finance ministers.
“The items qualifying for rate reduction in the upcoming meeting have been picked with an objective of giving a push to agriculture and clean energy. Other items in the 28 per cent tax slab will not be taken up this time with revenues yet to stabilise,” said an official.
The rate for irrigation equipment may be reduced from 18 per cent to 12 per cent, while that for bio-diesel vehicles and electric vehicles from 28 per cent to 18 per cent.
ALSO READ: GST has reduced effective tax payable for all sectors, except power: Study
Agriculture sector growth is projected to fall to 2.1 per cent in 2017-18 because of an expected decline in the rabi harvest and an almost 3 per cent fall in kharif production, according to advance estimates by the Central Statistics Office.
“Since rate reductions are under the GST Council’s purview and are unlikely to form part of the Union Budget, specific reductions for agricultural equipment and goods used by the farm sector could be considered in the next meeting. Considering the revenue decline for November, the government will be very cautious about further rate reductions unless expressly warranted,” said M S Mani, partner, Deloitte India.
In its last full Budget before the 2019 general elections, the government is expected to announce measures to boost agriculture and small enterprises. Decisions related to indirect taxes are now taken by the GST Council.
The upcoming minor tweaks are in stark contrast to the tax rate reduction for over 200 items in November by the GST Council in its meeting in Guwahati. Further large-scale rate reductions may have to wait with the revenue collection objective taking centre stage. GST revenue collection touched its lowest in November at Rs 808.08 billion.
ALSO READ: Businesses and tax experts still face problems in returns on GSTN
GST rates for 176 items were reduced from 28 per cent to 18 per cent and to 12 per cent for two items on November 15, leaving only 50 items in the highest tax bracket. In earlier meetings, the GST Council had lowered the tax rate on tractor parts from 28 per cent to 18 per cent.
“When rates of several items were reduced on November 15, it was indicated that rates may be further rationalised by pruning the 28 per cent slab. It seems that the GST Council is now moving in this direction.  This will help in simplifying the rate structure. The next step could be working on combining the 12 per cent and 18 per cent rates into a single rate of, say, 16 per cent,” said Pratik Jain, partner, PwC India.
The GST Council may also take up a proposal to reduce the rate on digital cameras to 18 per cent from 28 per cent. Companies like Nikon, Canon and Sony had in their representations pitched for a reduction in rates to safeguard the interests of an industry facing stiff competition from smartphones. Besides, in most Asian countries digital cameras are taxed 7-17 per cent, they have pointed out.
source:http://www.business-standard.com/budget/article/gst-council-may-lower-rates-for-farm-gear-electric-vehicles-next-week-118011200053_1.html