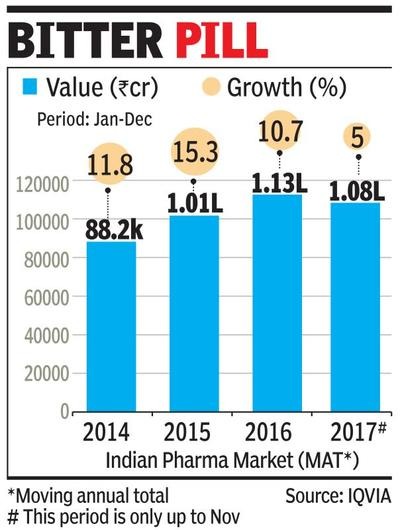 Mumbai: Domestic organised pharma retail market is expected to report one of its lowest annual growths in recent years of around 5-6% for the year ended 2017, bogged down by multiple factors including demonetisation and GSTimplementation.
Worse, this is not even half of the projected figure of 12.4% for the year, estimated earlier by healthcare market research firm, IQVIA (erstwhile QuintilesIMS). However, despite the challenges faced by the industry this year, it is poised to bounce back in 2018 with an estimated annual growth of 12%, experts added.

During the year, growth was also impacted due to price reduction on several drugs, industry experts say. Till December, the government fixed ceiling prices of 851 medicines (including two coronary stents) under revised schedule-I, based on National List of Essential Medicines, 2015. Over the last few years, the organised retail market has been reporting a strong double-digit growth of 12%, 15% and 11% for the years 2014, 2015 and 2016, respectively.

Though the industry’s sales for December are still being computed, there are enough indications about the subdued annual growth. The market was pulled down by lacklustre sales of anti-infectives for most of the year, which reported a negative growth of 4.1% for the January to November period. Anti-infectives has the largest exposure in the domestic pharma retail market, with over Rs 13,000 crore annual sales, followed by chronic therapies — cardiac and anti-diabetes.

When contacted, Amit Mookim general manager (South Asia), IQVIA, said, “Indian pharmaceutical market has been clocking double-digit growth figures for the past three MAT periods. However, the market has been impacted by multiple developments in 2017 giving it a subdued annual growth. Demonetisation and GST implementation were the two majors factors that caused significant level of disruption in the market. However, we feel that despite the challenges faced by the industry this year, it is poised to bounce back in 2018 with an estimated annual growth of 12.2%”.

Major therapies including anti-diabetes, cardiac and derma are growth drivers this year, posting a robust growth amongst the top 10 segments. Anti-diabetic drugs grew nearly 14%, while dermatology medicines posted one of the highest growths of over 16% during January-November period.

“We also forecast that in the next two to three years, the acute market will overtake the chronic one and this will motivate pharma companies in the way they innovate and shape brands and engage with both doctors and patients. We see a larger focus on fewer and more critical therapy areas. We think that the way information is used by patients to make decisions on choosing and buying healthcare and the awareness of healthcare brands in patient community — not individual brands but corporate brands — is becoming increasingly important, combined with the fact that India will see more and more push by the government on genericisation. The industry is also becoming much more mature and sharp about their commercial and branding strategy. We see a slowdown in a number of brands being launched and there is more focus on building bigger brands,” he added.