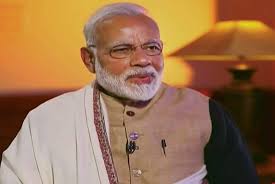 Prime Minister Narendra Modi today said GST and demonetisation are not the only achievements of his government and there are many others like financial inclusion, toilet construction and electrification that can be talked about for days together.

On expectations of a populist budget being in the offing ahead of the next general elections, Modi said the only focus of his government is “development, development and development, whether it is the first or the last budget and whether there are elections or not”.

“Sabka saath, sabka vikas (development for everyone) is my mantra” and whatever is required for that, his government has been doing and will do, the Prime Minister said.

Modi said the discussions on Goods and Services Tax (GST) began during the first NDA government led by Atal Bihari Vajpayee, but the UPA regime could not address the concerns raised by different states.

“I raised issues about Gujarat as the state’s chief minister at that time, but the central government did not listen to it. Similar issues were raised by Tamil Nadu and even Maharashtra ruled by Congress at that time,” he said in an interview to Zee News channel.

Replying to a query on big decisions like GST and demonetisation, the prime minister said these are not the only achievements of his government and there has been significant work in different areas.

“If you consider only these two things (GST and demonetisation) as my government’s work, it will be a big injustice to me,” he said.

He listed bringing unbanked people into the banking network, construction of toilets in over four lakh schools, cooking gas connections to three crore families, electrification of left-out villages, ramping up of urea supply, low-cost insurance for poor, LED bulbs to save power bills and environment as the other areas his government has focused on.

“I am only talking about work done on the economic front. I can list so many things that Zee News will have to run my interview for the entire week,” Modi said.

To a question on job creation, he said just in the formal economy, 70 lakh people have enrolled in the provident fund scheme and 10 crore people have taken loans under the collateral-free Mudra Yojana, while a large number of jobs are also being created elsewhere.