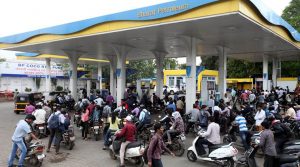 Chennai: Union Oil Minister Dharmendra Pradhan said his Ministry is trying to bring petrol and diesel under the purview of the Goods and Services Tax (GST).

“We are trying that petrol, diesel and kerosene should also come under the ambit of GST. We are hopeful that the GST Council will agree to it shortly,” the Petroleum and Natural Gas Minister said.

Responding to a query, the minister said the spike in petrol rates in the international market has impacted the cost of the fuel in India. “Besides, the State governments too levy cess on petrol,” he said.

In Indore, Pradhan rode a bicycle at “Saksham Cyclothon” to send the message of save fuel and environment. The Petroleum Conservation Research Association (PCRA) and the Indore Cycling Association (ICA) claimed that nearly 30,000 cyclists participated in the event. On the occasion, Pradhan said cycling promotes healthy life and helps in conservation of energy. “Prime Minister Narendra Modi has appealed to the countrymen to save energy,” he said.

The Congress had demanded that petroleum projects be brought under the GST ambit. Recently, Confederation of Indian Industry (CII) has asked the government for inclusion of oil and natural gas in the new goods and services tax (GST) regime at the earliest. The GST was rolled out from 1 July 2017 by subsuming most of the central and state indirect taxes into a single tax. But, crude oil, natural gas, diesel, petrol and aviation turbine fuel (ATF) have not been included in the ambit of GST as of now.

CII said till such time that the five are included in GST, C form should be continued to avoid high tax incidence on these products. “Though the understanding is that the previous VAT and CST rules would continue to apply to the excluded products, however, the related sectors continue to incur huge GST impact on all inputs without any set-off, as sale of crude oil and natural gas are outside the purview of GST and are subject to existing OIDA (Oil Industry Development Act) Cess, Central Sales Tax Act and State Value Added Tax,” CII press release said.

Amid rising fuel prices in India, clamour to bring petrol and diesel under Goods & Services Tax (GST) has become louder – this time led by former Finance Minister P Chidambaram. Accusing the Modi government of being anti-consumer, Chidambaram said citizens are being squeezed due to the increasing petrol and diesel prices. “Petrol and Diesel prices have hit the roof. Govt continues to squeeze the consumers. Absolutely anti-consumer,” Chidambaram said in a series of tweets. “Why doesn’t the BJP bring Petrol and Diesel under GST and give relief to consumers?,” Chidambaram said.