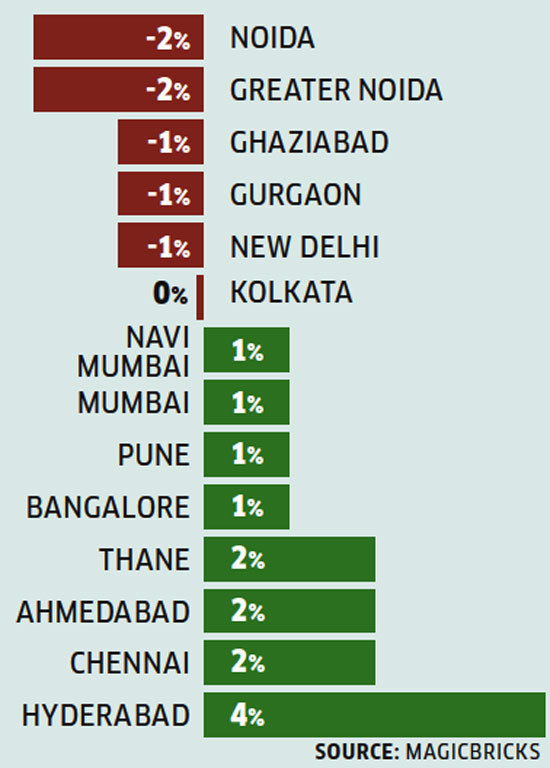 Resident ial property markets across India’s top 30 cities have shrugged off the impact of demonetisation and absorbed the short-term blow of several regulatory changes aimed at formalising the real-estate sector.

In the quarter-ended September, these property markets started showing signs of returning to normalcy as sales registered the best performance in five quarters. Based on sales volumes, 22 of the top 30 markets were either hovering around their five-quarter.

All cities have bounced back from the lows witnessed around demonetisation, showed data from Liases Foras Real Estate Rating & Research.

The performance in this quarter assumes significance as two key reform measures were implemented around this time. In May, the government implemented the much-awaited Real Estate (Regulation & Development) Act, 2016 and the country transitioned into the new indirect tax regime with the rollout of Goods & Services Tax (GST) on 1 July.

According to Magicbricks’ Propindex, the October-December 2017 quarter witnessed an average price increase of 3.1% in 46% of the 750 localities across 14 major cities. The Magicbricks’ National Price Index (NPI), after remaining stagnant for almost two years, saw the first price gain in the July-September 2017 quarter and this has continued in the October-December quarter as well with just under 1% increment. In the quarter-ended September, sales volume in tier I cities such as Mumbai, National Capital Region (NCR), Pune, Bengaluru, Hyderabad, and Ahmedabad were at their five-quarter best levels .

In tier II cities, Vadodara, Bhubaneswar, Bhopal, Nashik, Kanpur, Thiruvananthapuram, Mangalore and Rajkot have also recorded their best sales volume in the last five quarters, the data showed. “The response in metros and even smaller cities is improving, but especially for readyto-move in apartments. It ensures that there is no gap between promises and deliveries. Speculators and investors are out of the market, and the demand is now driven by end users who prefer less uncertainty,” said Rajeev Talwar, CEO of DLF. Besides affordable pricing, improving consumer confidence due to implementation of RERA and various other government incentives for lowincome group housing have worked in favour of smaller cities.

Coupled with the demonetisation move, both RERA and GST implementation will help improve compliance and transparency levels within the industry and this is expected to boost homebuyers’ confidence. “Notwithstanding the short-term impact that the recent regulatory transitions have caused, the industry is expected to stabilise in 2018 as both real estate developers and customers become attuned to the changed regulatory scenario,” said Shubham Jain, vice-president and sector head — corporate ratings, ICRA.

In addition to sales volume, the broader markets, including smaller cities have seen prices moving above the lower levels touched during the demonetisation quarter of October-December. However, they continue to remain sluggish and are yet to go back to pre-demonetisation levels. Cities like Kochi, Kolkata, Nashik, Jaipur, Patna, Bhopal and Vadodara have seen prices moving above the levels touched in December 2016 quarter, but remain below levels recorded in September 2016 quarter.