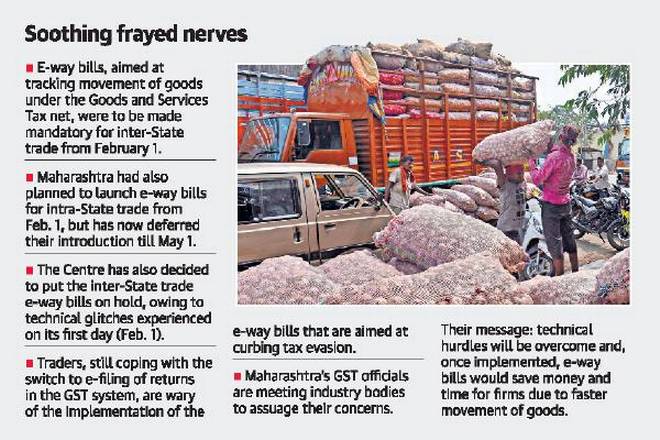 The Maharashtra government has assured businesses and traders that technical glitches in the e-way billing system for movement of goods under the new Goods and Services Tax (GST) regime will be removed soon.

The State government had, in late January, deferred a plan to launch the e-way Bill system for movement of goods within the State from February 1 to May 1.

Under the GST system, all consignments worth over Rs. 50,000 moving over 10 km from their origin will require prior registration and generation of an e-way bill through the GST Network. This system, aimed at helping authorities keep track of all taxable goods and detect potential tax evasion, was to kick in for inter-State sales from February 1.

However, after businesses experienced serious issues on the portal for generating e-way bills last Thursday – the first day of its implementation — the Union government decided to put off their roll-out for now. The system had been crashing even in its trial phase that began in the second fortnight of January, say to industry sources.

Assuaging the concerns of a large number of Mumbai-based businesses, including suppliers and transporters, senior State government officials said the system will be fully functional very soon without glitches so industry need not be too anxious.

‘No reason to worry’

“Despite all the doubts about it, this system will work really well for large multinationals and reduce wastage of goods and time. It will also speed up vehicle movements,” said Shivaji Patil, deputy commissioner, GST (Investigation).

The main purpose of the new system is to end corruption, eliminate border check posts and end the ‘licence raj’ that often created hurdles in free and smooth movement of goods in the past, officials pointed out.

On Saturday, at a training program for the e-way bill regime organised by the Steel Users Federation of India (SUFI), businesses raised a number of queries about its practical functioning.

‘How user friendly is the online system? How much time will it take to generate an e-way bill? How would illiterate drivers and transport workers cope with the e-way bill compliance needs?’ – representatives from different sections of industry asked.

According to State GST officials, the responsibility of the timely movement of goods has been placed on the transporter who will be penalised in case the goods are stuck or lost in transit.

“It is a huge relief to find out the transporter can no longer hold the goods back. In the past, he would sit on the consignment for days despite repeated requests,” said Janak Sanghvi, a trader who supplies goods from Mumbai.

Officials said that Karnataka, which had introduced the e-way bill system on a pilot basis last year, had a reasonably glitch-free experience. “The new system is a major challenge that is facing our industry and the traders. The GST officials have clarified our doubts about the e-way bills,” said Nikunj Turakhia, president of SUFI.