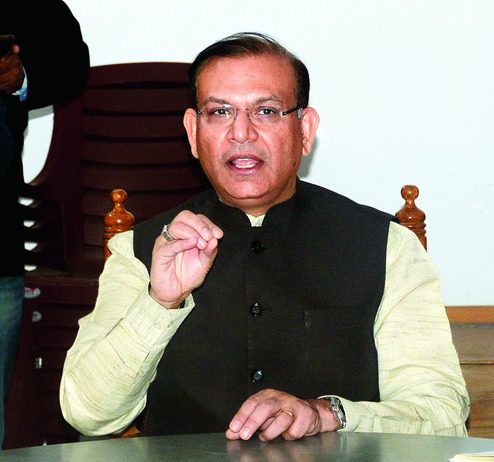 Patna: Union minister of state for civil aviation and senior BJP leader Jayant Sinha on Monday said the Centre stood for bringing petroleum products under the ambit of goods and services tax (GST) and efforts will be made at arriving at a consensus on this in the GST council.

“Our government supports the idea of bringing petrol and diesel into the ambit of the GST and efforts will be made to arrive at a consensus on this in the GST council,” Sinha told journalists after a meeting with office-bearers of the BJP state unit here during which he briefed them about the major points of the Union budget that should be brought to the notice of the people.

As things stand now, states are free to levy their own taxes on petroleum products and it leads to price variation as far as prices of petrol and diesel are concerned. Introduction of GST will bring homogeneity in the fuel prices but this can be done only after the GST council takes a decision.

The council has representatives of the states as well as the Centre.

Terming the Union budget proposal to give a minimum support price (MSP) to farmers, at least 1.5 times of the input cost and a step towards honouring a promise made to farmers, Sinha said efforts were being made to bring all the agricultural products under the MSP and not keep it limited to important cereals like paddy and wheat.

“Discussions will be held with the Niti Aayog and states for giving minimum support price for all crops,” the Union minister said.

Sinha urged the people to see the five budgets presented by the NDA government at the Centre in totality and said the steps taken for addressing issues like universal social security, tax reforms, entrepreneurship promotion, non-performing assets and medical insurance cover to around 50 crore people would be remembered for years.

Rubbishing charges being levelled by Opposition leaders on the issue of employment generation, Jayant said it was nothing but a canard and people should look into the employee provident fund organisation figures, where around 60 to 70 lakh additions were being made every year.

“Moreover,” he said, “One also needs to look into the Mudra loans under which 10 crore people have taken a Rs 4 lakh crore loan for starting various works.”

He also spoke at length on rural infrastructure, education sector and overall macro-economic indicators to substantiate his claim that those criticising the budget need to crosscheck the figures.