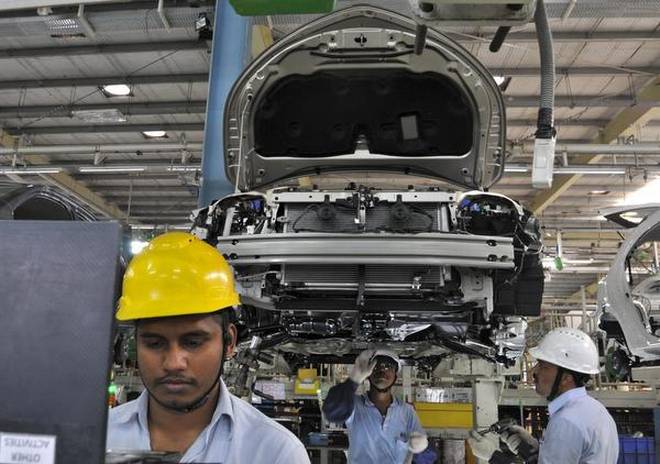 Economy watchers who were wallowing in gloom due to soaring oil prices, the wilting rupee and skittish foreign investors have been given some reason for optimism by the Central Statistics Office (CSO).

The CSO’s provisional GDP estimates for FY18 suggest that growth revved up to a brisk 7.7% in the January-March quarter, the highest real GDP print in seven quarters. So, is this sustainable and what are the takeaways from the fine print?

A show of resilience

The good news first. The quarterly GDP numbers show that the Indian economy has proved remarkably resilient to watershed events such as demonetisation and implementation of the Goods and Services Tax (GST). GDP growth, which was cruising along at 7.6% in the second quarter of FY17 decelerated sharply to 6.8% and 6.1% in Q3 and Q4 of FY17, after demonetisation vacuumed up a large chunk of money supply. Even as remonetisation proceeded at a sluggish pace, the rocky transition to GST, from July 2017, posed fresh challenges. Glitches in the GST Network, lack of clarity about transitory provisions and frequent changes to tariffs impeded business-as-usual in the transition months from April to August. This forced many firms to pare inventories and go slow on sales during these months. This slowed GDP growth to 5.6% and 6.3% in Q1 and Q2 of FY18. But economic activity has revived quite briskly thereafter. Real GDP growth accelerated to 7% in Q3 of FY18 and 7.7% in Q4, as per the latest GDP data, showing that the formal sector at least, has managed to successfully navigate the twin speed bumps of demonetisation and GST.

Though FY18 has closed with the lowest real GDP growth in four years (6.7%), trends in recent quarters promise better times ahead.

Economic commentators tend to focus exclusively on real measures of output to gauge economic activity, after stripping out the price effect. But it is nominal growth that truly drives income growth for households and top-line growth for firms.

Thanks to high inflation rates, India’s nominal GDP growth rates have historically held at double digits, with these growth rates hovering between 10.7% and 13% in the four years to FY17. But with inflation moderating and growth slowing abruptly in the first half of 2018, nominal growth rates dipped from 10.7% in Q4 of FY17 to 8.3% and 9.5% in Q1 and Q2 of FY18. But with inflation normalising and growth picking up, the last two quarters have seen nominal GDP growth return to 11%. That is good news for income earners as well as investors at India Inc. A sectoral breakdown of GDP numbers shows that job-creating sectors, which took a sharp hit in January to June 2018, are now on a turnaround path. Manufacturing, which saw GVA (gross value added) growth slip to 6.1% in Q4 FY17 has expanded by 9.1% in Q4 FY18. Construction which shrank by 3.9%, grew by a hefty 11.5% in Q4 FY18. Trade, hotels, transport and communication, which slipped to 5.5% in Q4 FY17 has rebounded to 6.8%. And financial services and real estate which flatlined in Q4 FY17 grew by 5% in the latest quarter.

Yes, agriculture and mining have slowed. But given that manufacturing, trade, construction and services are the key employment generators for the Indian economy, their revival has a big impact on the feel-good factor.

That is not all. For the last four years, analysts have fretted about stalled private investments holding back growth, with the two other legs — private consumption and government spending — doing much of the heavy lifting. This was attributed to high interest rates, excess capacities across industries and the high debt stockpile at India Inc. But the latest quarter has brought evidence of private investments coming back to life too, with Gross Fixed Capital Formation growth at 14.4%, improving steadily from 1% in Q1. Buoyant commodity prices, lower interest rates and dwindling corporate debt are likely to have driven this.

Despite all these positives though, the economy’s Achilles Heel is its continued reliance on government spending for growth. Breaking down the GVA numbers for FY18, it is hard to ignore that the fastest growing segment was not manufacturing or services, but ‘public administration, defence and other services’. This segment expanded by 10% in FY18 on top of a 10.7% growth in FY17.

Now, ‘public administration, defence and other services’ is simply jargon for the revenue expenses incurred by the Central and State governments towards running their officialdom. GVA estimates at current prices of this item rose from ₹16.6 lakh crore in FY16 to ₹22 lakh crore in FY18, as the implementation of the Seventh Pay Commission recommendations entailed higher salaries, HRA and other benefits to government staff.

These burgeoning payouts have clearly acted as a stimulus over the last three years, propping up consumer demand, aiding sales of goods and services, and thus feeding into GVA growth for both manufacturing and services.

India to clock GDP growth of 7.7% in January-March:Nomura

What has helped the government sustain these high spends despite its deficit restraints, is its buoyant excise, customs and sales tax (now GST) mop-ups. These tax mop-ups, at ₹15.9 lakh crore for FY18 accounted for a 9% chunk of the nominal GDP. The tax collections in turn have received a huge helping hand from the exceptionally high duties on fuel, imposed at a time of falling oil prices.

But with global oil prices soaring in recent months, this windfall is no longer a given. Crude oil prices are now expected to average $68-70 a barrel in 2018, compared to $55 last year. As pump prices climb to record highs, pressure is mounting on the government to roll back its duties to offer relief to consumers. If the government complies, it will have to tighten its belt on both revenue and capital spending.

This will amount to the withdrawal of the silent stimulus that India’s economy has enjoyed over the last three years.

So, will Indian households carry on with their spending spree even without the Pay Commission booster? Will the private sector ratchet up its investments to compensate for a government go slow? This will decide whether India’s GDP numbers power ahead or lose steam in the coming months.