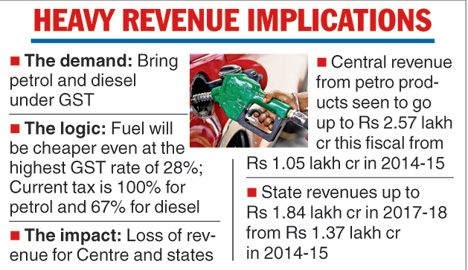 New Delhi: The flare-up in the prices of petrol and diesel has raised the demand for bringing the fuels under the goods and services tax to provide relief to consumers. However, analysts said the prices are unlikely to come down as a result of this measure.

Blaming global factors for the spike in crude prices, petroleum minister Dharmendra Pradhan said, “It has now become essential to bring petrol and diesel under GST.”

States such as Maharashtra and Punjab are in favour of bringing the two products within the the indirect tax regime.

Petrol and diesel under the GST is often cited as a long-term solution to ease the burden of high fuel prices on the common man. This is easier said than done though because the current rate of tax is 100 per cent for petrol and 67 per cent for diesel and these rates do not fall into any of the existing GST slabs.

The proposal to include fuel under the GST is based on the assumption that the highest tax rate of 28 per cent will make the product cheaper than the current rates.

The total taxes on petrol and diesel at present are already beyond the peak rate, and if the rates are kept at just 28 per cent, it would result in a big loss of revenue to both the Centre and states.

The Centre currently imposes a total of Rs 19.48 per litre of excise duty on petrol and Rs 15.33 per litre on diesel. State sales tax, or VAT, varies from state to state.

Unlike excise duty, VAT is ad valorem and results in higher revenues for the state when the rates move up.

State governments add a value-added tax (VAT) on petroleum products, which is 16-40 per cent for petrol and 12-29 per cent for diesel.

Further, every state gets 42 per cent of what the Centre collects under the recommendations of the Finance Commission.

Petroleum products such as petrol, diesel, natural gas, jet fuel and crude oil are outside the GST regime and the industry is not getting the benefits of input credits, while the Centre gets an additional revenue of Rs 20,000 crore per annum.

Officials said, “The tax on petrol even under the indirect regime has to be a combination of GST and VAT.”

For the rates to be revenue neutral, the GST Council would have to levy cess on the two products so that there is no loss of revenue to the Centre and the states.

Official data show the Centre’s gross revenue collections from petroleum products have risen steadily in five years to a projected Rs 2.57 lakh crore in 2018-19 from Rs 1.05 lakh crore in 2014-15, accompanied by an increase in excise duties. Before this, in 2013-14, the gross revenue collection from petroleum, oil and lubricants (POL) was Rs 88,600 crore.

“The increase in petrol and diesel prices is likely to give states a windfall gain of around Rs 22,700 crore over and above the budget estimates for the current fiscal. Alternatively, a $1 per barrel increase in oil prices translates, on an average, into a Rs 1,513-crore revenue gain to all the major nineteen states,” the SBI research report said.

Taxes on auto fuel are a double-edged sword for the government – if they are reduced, it would make a deep dent in the states’ finances and strain the Centre’s purse. If the prices don’t come down, it will dent the vote bank.