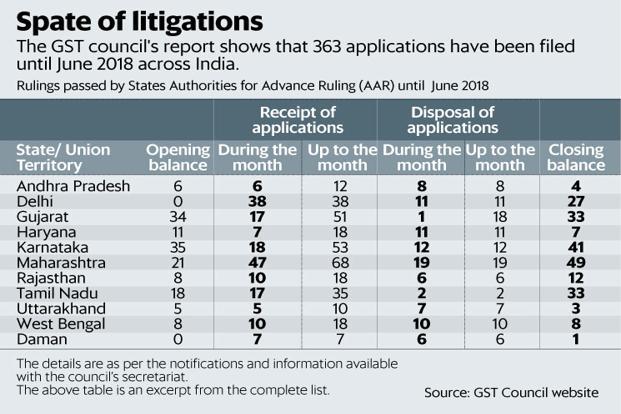 The pace at which applications are being filed is alarming, considering that it has only been 15 months since Goods and Services Tax (GST) has been implemented

A slew of contradictory advance rulings by the various tax benches has made the already complicated world of goods and services tax (GST) more complex.

A bunch of varied interpretations of the GST law by different Authorities for Advance Ruling (AAR) on the same subject is the latest addition to compliance challenges for businesses. For instance, recently, the Maharashtra AAR said that the process of installing solar equipment would attract 18% GST, while the Karnataka bench ruled that a 5% rate would apply.

In another matter on taxing printed advertisement materials, the Telangana AAR and West Bengal AAR not only gave conflicting verdicts, but also used different methodologies to arrive at their conclusions. That litigation would escalate in the GST-era was already anticipated. However, the pace at which applications are being filed is alarming, considering that it has only been 15 months since GST has been implemented.

The latest report issued by the GST Council, on applications received and rulings passed by the states authorities for advance ruling (AAR) revealed that 363 applications have been filed so far across India.

As the chart alongside shows, Maharashtra tops the list with 68 applications, followed by Karnataka, Gujarat, Delhi and Tamil Nadu. Tax experts foresee this number rising in the months to come. Although there have been reports that the government may consider setting up either a centralized authority or four regional authorities, there is no clarity on the timeline as yet.

While setting-up of a National Appellate Authority is the need of the hour, what also needs to be taken care of is that there is a judicious mix of people from the revenue department and law officials for a balanced judgement, tax experts said. Here, the government needs to take a leaf out of the advance ruling system practised in the excise/sales tax regime, where the decisions given were fairly reasonable, they add.

A delay in sorting out this issue would result in further increase in the compliance cost for businesses and hamper the ease of doing business in the country—a key feature widely tom-tommed when introducing GST.