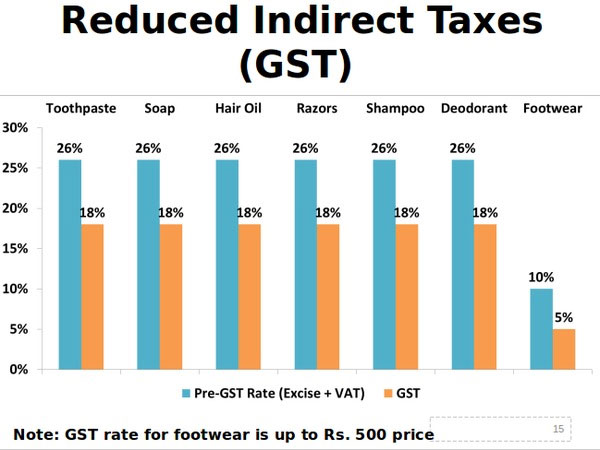 New Delhi, Oct 17: The Indirect taxes on essential commodities has been reduced substantially due to the implementation of Goods and Services Tax (GST). Indeed, a boon for end-consumer, especially, middle-class people in India.

The indirect tax on essential consumer goods such as soap, toothpaste, hair oil, razors,shampoo and deodorant has been reduced from 26 per cent (excise+VAT) to 18 per cent. Notably, tax on footwear reduced by 50 per cent, i.e., from 10 to 5 per cent.

Not only FMCG,the indirect tax on spices was also reduced from 6 to 5 per cent, Idli Dosa batter 12 from 5 per cent, roti 12-5 per cent and mineral water 27- 18, as per data provided by MOSPI Consumption Basket. NSSO Data (50th to 60th percentile. Hence, even eating out with family is no longer a luxury for middle class in urban areas. In fact, GST rates have been lowered on almost 33 per cent of goods and services since GST rates finalised. Though, this is expected to lead to higher volume and in turn higher revenue in future.

Even Union Minister Arun Jaitley, in his social media blog on July 27, said that if the entire category of all the slabs is taken, the past one year has seen a reduction of tax in 384 commodities with no increase on a single product. India has never witnessed such mass tax reduction since Independence. Lesser rates and higher collection is the result. With the festive season being on the anvil, a 10% rate reduction for goods like refrigerators, freezers, washing machines, vacuum cleaners and small-sized televisions should soften prices for these products-especially at a time when their demand is typically expected to witness a boom. Also Read | GST council meet: Government to constitute 7-member GoM to discuss Kerala cess proposal Goods and Services Tax (GST) is an indirect tax levied in on the supply of goods and services. GST is levied at every step in the production process, but is meant to be refunded to all parties in the various stages of production other than the final consumer. Goods and services are divided into five tax slabs for collection of tax – 0%, 5%, 12%,18% and 28%. However, Petroleum products, alcoholic drinks, electricity,are not taxed under GST and instead are taxed separately by the individual state governments, as per the previous tax regime.