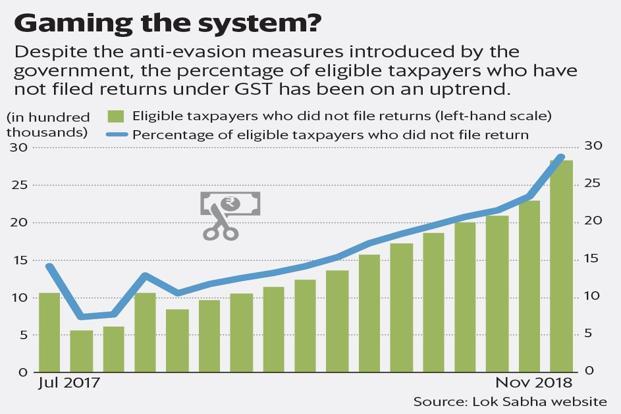 Mumbai: It’s fairly clear by now that goods and services tax (GST) collections are falling way short of the government’s initial expectations. The monthly run rate of collections until November was less than ₹90,000 crore, far lower than the monthly average of ₹1.05 trillion required to meet the annual target.

One reason, of course, is the downward revision of tax rates on various products. But another, and more worrying cause, is widespread tax evasiondespite measures such as e-way bills.

Shiv Pratap Shukla, minister of state for finance, provided data in Parliament on Friday that showed the percentage of eligible taxpayers who are not filing returns has risen sharply. A year ago, 84.4 million hadn’t filed returns; this has risen to a whopping 283.1 million.

“Our understanding is that people are still gaming the system and this has to do with input credit,” said an expert in indirect taxation, who did not want to be named.

“Basically these companies are claiming input credit by showing estimates of their sales in the GSTR-1 form, as you just have to give details of your sales in this form and not show the actual invoices based on which the input credit is being availed. Later, they avoid paying GST, as payment of taxes happens when you file the GSTR-3B form. So, in many cases, registrations are made, and initial GST payments are missed. By the time the tax authorities figure it out, many of them have deregistered or shut shop,” he added.

The data presented by Shukla showed that until December, 499 cases of fake invoices, which were used for claiming input tax credit worth ₹3,895 crore, were detected. In contrast, in the July 2017-March 2018 period, only four such cases had been detected, cumulatively worth ₹9.75 crore.

“Many companies, which have not been paying income tax, continue to remain outside the GST net as well. They have simply decided to not get registered,” said another tax expert requesting anonymity. “Frankly, the government doesn’t have the bandwidth to detect all such cases, ” added the tax expert.

The dice seems loaded against the government, which also may not want to be seen as being too tough on small businesses ahead of the general elections.

Leakages are especially high in industries where the market share of unorganized companies is high.

Analysts at JM Financial Institutional Equities recently visited Haryana’s Yamunanagar, a region where 550-600 plywood manufacturing units are located. According to their interactions, while invoicing levels have increased, e-way bill implementation is still not strict at most places and companies are able to get away with under-invoicing, it said in a report on 12 December.

“Reconciliation of GSTR-1 and e-way bills generated by taxpayers need to be implemented at the earliest for e-way bills to be a more effective anti-evasion measure,” says Abhishek Jain, tax partner, EY.

After the implementation of e-way bills in April 2018, revenues were expected to rise. It was expected that lower effective taxes, along with increased compliance, would accelerate formalization, and organized businesses would gain share and tax collections would surge. But it seems the mechanism has failed to yield the desired results so far.

“The government is committed to increase the percentage of compliance by taxpayers under GST,” Shukla told Parliament. “In this regard, an extensive outreach programme has been carried out across the country to create awareness among traders, industry bodies and other stakeholders. Further, effective enforcement measures are being undertaken to check cases of tax evasion and fake invoices.” It’s another matter that the numbers he provided don’t hint at any reduction in evasion.

In fact, the way things stand, shoring up GST revenue collections meaningfully could be a long row to hoe.