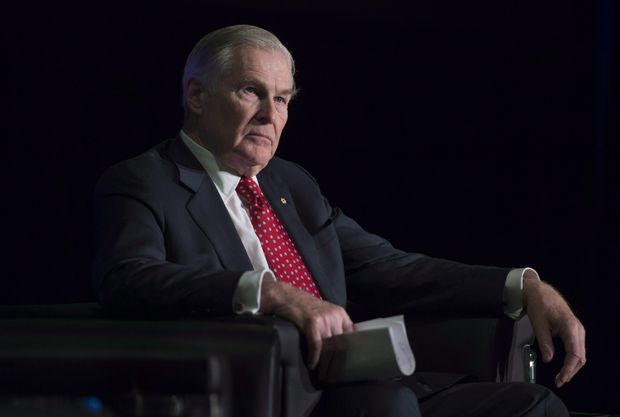 Michael Wilson was a man of parts. The resumé of the former federal finance minister, who died this weekend at 81, overflowed with power-broker credentials and Establishment laurels.

Schooling at Upper Canada College and the University of Toronto; a young man’s ascent through the ranks of Bay Street; the Progressive Conservative nomination in Etobicoke Centre; a seat in Parliament; cabinet posts handling finance and international trade.

His post-political career was in some ways more impressive still. Aside from the ambassadorship to the United States and the chancellorship of his alma mater, he became an advocate for supporting those with mental illness after his son, Cameron, committed suicide in the mid-1990s.

Fittingly, the tributes have come in thick. But too few will give him credit for his greatest achievement, which was also his least loved: the dreaded goods and services tax. Mr. Wilson introduced it in 1991 as Brian Mulroney’s finance minister, and it was unpopular from Day One. Unpopular, but the right policy.

The GST was designed to be revenue-neutral; its goal was not increasing government revenue but instead raising it in a smarter, more progressive and more economically efficient way, in light of the best economic research at the time.

For 60 years before his government took office, Canada had a manufacturers’ sales tax, applied when makers sold their wares. Economists deplored the MST. It was opaque, with consumers paying it indirectly through higher prices; inefficient, since many products were effectively taxed once in the making and then again when they were sold; and it punished Canadian exporters. To boot, it wasn’t even especially good at generating revenue, since it didn’t apply to the value added to products at the wholesale and retail levels.

Few now dispute that the GST – which is only fully paid by the consumer at the point of purchase – is an improvement. But Mr. Wilson faced a slog to get it passed. His government initially proposed a nine-per-cent tax, harmonized with provincial sales levies. By the time the House applied its stamp, it was down to a standalone federal tax of seven per cent. Even then, Mr. Mulroney had to pack the upper house with eight new senators to get the law through.

And the public hated it. There were many reasons for the immolation of the Progressive Conservative Party in the 1993 election, but the GST’s unpopularity was surely among them.

Mr. Wilson did not suffer through that humiliation, instead riding a golden parachute to a reunion with Toronto’s financial sector, and then a long second act performing good works. Meanwhile, after he shed his political jumpsuit, a funny thing happened: the reviled GST stuck around.

Jean Chrétien campaigned to victory in 1993 while vigorously but vaguely promising to get rid of the GST. He never did. Instead, Mr. Chrétien and his finance minister Paul Martin used the steady stream of revenue to help balance the federal budget. Mr. Wilson would have been forgiven for enjoying that.

Eventually, the provinces got on board with harmonization. Quebec negotiated a deal when Mr. Wilson was still minister that allowed the province to administer both the GST and its homegrown QST. Ontario and all of Atlantic Canada, meanwhile, now charge a harmonized sales tax administered by the feds. Most Canadians live in a province that follows the broad strokes of Mr. Wilson’s vision.

Why? Because the arguments for it have simply added up. Value-added taxes tax spending and encourage saving. Traditional sales taxes are regressive, falling hardest on low-income people, but credits for low-income Canadians make the GST progressive. The revenue is fairly stable. The system of input credits makes tax evasion far less likely than under a sales tax.

And instead of punishing exporters, it puts them on a level playing field with importers – which is why U.S. President Donald Trump last year complained that his country, with traditional sales taxes, is at a disadvantage when competing against countries with a GST.

If you put sound policy ahead of politics, as Mr. Wilson did, you may pay an electoral price. But when the dust has settled and the obituaries are written, your country will thank you. Take your pick.