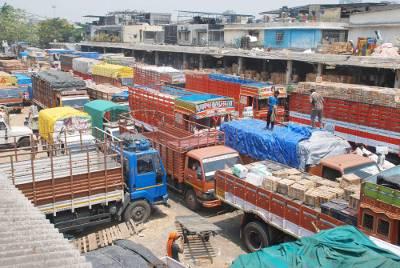 “The quantity of goods we bring in for Tamil Nadu Civil Supplies Corporation from AP and Bengaluru, cement and coal from Ennore, and many other goods, are all down by 30% to 40%,” said R Sukumar.

CHENNAI: Nearly a month after the Centre rolled out Goods and Services Tax (GST), truck owners say bookings have dropped by 30% to 40%, with consignors, consignees and transporters yet to understand and incorporate the new tax norms.

Though relieved that border checkposts have been abolished, truck operators are concerned about the lack of clarity on GST norms, given that it may take a few more months for the e-way bill mechanism to be implemented.

The e-way bill facilitates movement of goods of more than `50,000 in value, provides details of the goods, and generates a unique number.

R Sukumar, president of the TN Lorry Owners Federation, said there has been a significant drop in bookings post-GST. “The quantity of goods we bring in for Tamil Nadu Civil Supplies Corporation from AP and Bengaluru, cement and coal from Ennore, and many other goods, are all down by 30% to 40%,” he said.

He said traders are not sure about tax rates, and many are yet to register in the new system. State authorities told them they could use the VAT number for two months. “But some RTO officials ask for GST number,” he said.

A state commercial taxes department official, who requested anonymity, told TOI, “There will be doubts initially. The e-way bill mechanism is still being prepared and will come into effect in 15 to 20 days. Until the common e-way bill is prescribed, individual states can prescribe VAT (form JJ) to accompany the invoice,” he said, adding that truck owners “can forward their concerns in writing”.

N P Velu, vice-president of the State Lorry Owners Federation – TN, Namakkal, said, “Billing is delayed as traders are not clear on GST. The situation was bad till two or three days ago. Some loads [are being transported] only now.”