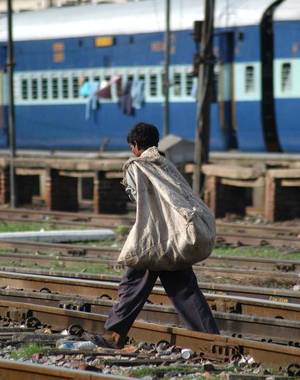 As the nation ushered in the Goods and Services Tax (GST) on July 1, no one would have imagined that it might have adverse consequences for the environment. But with the tax rate on recycled plastic shooting up from 5.5% to 18% post-GST, ragpicking as a livelihood seems to be turning unviable, with attendant impact on the urban environment.

Take the case of Nagaratna and her self-help group (SHG) at Mahadevapura. Nearly a month post-GST, the Mahadevapura Mahila Okkuta, a collection of 17 SHGs that collects and segregates waste in Garudacharpalya, is staring at the prospect of their profits being wiped out.

Before GST, they had consistently made ₹30,000 as surplus. “This month it is zero,” says Nagaratna from the Okkuta. “We have been collecting and recycling waste for over 12 years now. We have never faced a situation like this. We’ve even had to cut down on the lunch we give our workers.”

After the onset of the GST, the 18% tax imposed on waste plastic has sparked a downward spiral in prices in the waste recycling markets. Plastic recyclers faced with the new tax are protecting their margins by slashing the prices at which they buy from the thousands of waste managers and ragpickers.

The price of mixed plastic has come down from ₹19 per kg to around ₹13 now. Lucrative PET bottles fetch ₹17 per kg, as against ₹22 last month; empty milk covers sell at barely ₹7 per kg, down from ₹16; glass bottles (750ml) go for 50paisa per kg, instead of the ₹1.5 per undamaged bottle. These figures were collected by The Hindufrom various waste collectors.

“We work on tiny margins, of barely ₹1.5 per kg recycled. When prices drop, our business sinks. We can only hope that this is temporary, for otherwise it would become difficult to recycle. This being an informal sector, not many have TIN (Taxpayer Identification Number). Taxes paid by the recyclers are recovered from us instead,” says Mansoor Ahmed Ghouse, who manages a dry waste collection centre where 12 workers process 2.5 tonnes of waste daily.

Similarly, Hasiru Dala, an organisation of waste workers that manages 43 such centres, says that civic workers have significantly reduced selling plastics to collection centres as the prices are “no longer lucrative.”

At Jali Mohalla, one of the largest open markets for recyclable products in the city, the lower demand for recycled products, coupled with the “sudden introduction of confusing taxes” has resulted in lower purchases of waste material.

A little higher up the recycling chain, Rasool Khan of KK Plastics, which fashions recycled waste into bitumen, says the hike in tax rates from 5.5% to 18% has made their products uncompetitive. “All we can do is cut our margins so that even with the higher tax rate, the product is sold at the same rate. I don’t understand how an environment-friendly initiative such as recycling can be taxed at this high rate,” he said.

Incidentally, the GST has hit the civic corporation too. Under the present system, it has outsourced the sweeping of streets, collection of segregated garbage from homes, and transportation of waste. All these activities have overnight become a ‘service’ under the GST regime. Considering that the corporation spends more than Rs. 400 crore on these ‘services, the 18% tax burden works out to R₹72 annually.