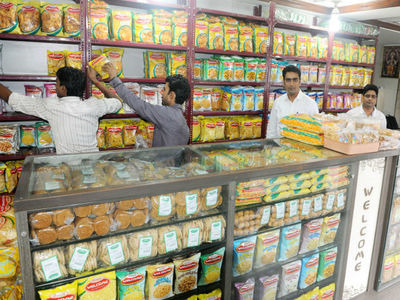 THIRUVANANTHAPURAM: The skyrocketing prices of commodities and the switchover to the GST regime have turned Onasadyas at hotels and restaurants across the state a costly affair.
Though a nominal increase in price is expected every year, hotels, restaurants and caterers are charging between Rs 250 to Rs 400 per head this Onam against the Rs 100-Rs 250 price range during the previous season. In four-star hotels, the rates of Onasadya have gone up to Rs 500.
While hoteliers admit a 10-15% increase in prices, they blame it on the general rise in prices of commodities and the GST regime. “Prices of all ingredients including oil, rice, banana and vegetables have gone up. Even the plantain leaf which was available at Rs four few days ago now costs Rs eight,” said Kerala Hotels and Restaurants Association (KHRA) Thiruvananthapuram district secretary B Vijayakumar.
There has also been a significant increase in the production cost for payasams, thanks to rise in price of ghee and jaggery . Even half-a-litre of payasam at KTDC restaurants now comes at a price of Rs 140. “Ghee, which was priced at around Rs 200 per kg a decade ago, now costs Rs 500-600, and it is the major reason for this high price for payasam,” the KHRA office-bearer pointed out.
The state government’s subsidised rates for provisions at its Onam markets are not applicable to restaurants or catering units, said Sunil Kumar, managing director of B Six Outdoor Caterers.”We still have to procure these commodities at a high price from open markets. Besides, we are also facing stiff competition from illegal catering units, which do not have to pay taxes, and our business is turning into loss. Last year we had priced Onasadya at Rs 150, but even increasing it to Rs 175 this time does not seem to be profitable,” he said. All these establishments strive for an average 30% profit, and the variations in prices depend on the production cost.
However, there has been no slump in demand, as families, especially in urban areas, prefer to have Onasadya outside their homes these days, said Vijayakumar. “Around 25% of hotels in the capital city (500-600) offer Onasadya during the season, which could be an average across the cities. This itself shows that the demand is huge,” he said.
Moti Mahal in Pattom is one such restaurant in Thiruvananthapuram which serves Onasadya to around 250-300 people on Thiruvonam Day , especially those from Technopark. “The price was Rs 240 last year and this Onam we have priced it at Rs 299 inclusive of GST, which is very competitive when compared to the price at many other hotels which charge more than Rs 400,” said Balu, front-office man ager, Moti Mahal.
Meanwhile, the four-star hotels blame it mainly on the GST switchover for the in crease in Onasadya rates.
“There was only a five per cent tax before the GST re gime and we were offering Onasadya in the range Rs 400-450. The 18% GST has now forced us to price it at Rs 500 net,” said an executive with Maurya Rajadhani.
“We are offering a sadya package which includes five non-vegetarians dishes arranged in clay pots for the customers. The package launched on Atham will continue for 11 days and costs Rs.535,” said general manager, Hotel International, Kochi. The price is inclusive of GST. In Kozhikode even vendors who sell payasam on the wayside are charging excessively. A single cup of payasam is priced in the range of Rs 30 to Rs 50.”I contacted many hotels offering Onasadya for a group of friends coming from Chennai. Most of them are charging Rs 450 to Rs 500 for a single sadya,” said C Shintol, who is from Kozhikode but works in Chennai.
(With inputs from Kochi & Kozhikode)
Few petals less but flowers hold the season
KOCHI: The prices of flowers remain more or less the same with minor fluctuations in markets in Kochi post Atham. Still, vendors are of the opinion that the prices would fall in the coming days.
Ravi, a flower seller, said he procures them from Tamil Nadu. “Onam being a festival which is still close to Malayali hearts high prices won’t stop them from making pookkalams (floral carpet).They may reduce the quantity of flowers, but would definitely purchase,” Ravi said.
Mini, a house wife, is of the opinion that the high prices may affect the Onam celebration in the coming years. “It is to be seen whether we will be able to celebrate Onam in its true spirit,” she said.
Many are exploring strategies to reduce the impact. “Bulk purchase of flowers is profitable. So, it would be good if we purchase as a group”, said Maya, a student of St Albert’s College, Ernakulam.
Gomathi, a senior citizen, said Onam celebrations have lost their sheen. “In the olden days, flowers would be plucked from our on premises or from areas nearby,” Gomathi said.
According to vendors, the volume of flowers sold has come down compared to last year.”Flowers come from Tamil Nadu and Karnataka. In the first few days of Onam, prices of flowers were high. Now, it has started to fall. The initial hike in the price was due to the Ganeshotsavam,” said Venu, a flower vendor in Kochi.