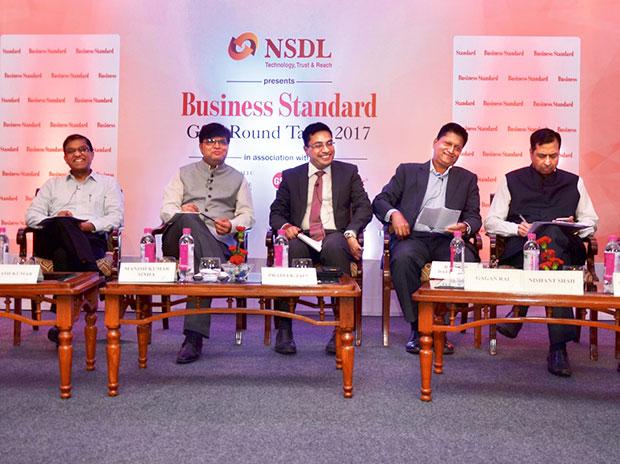 The slabs under the goods and services tax (GST) regime may be reduced to just three from the current four over the next two to three years as the new tax system stabilises.

“We are looking at three clear rates, I will say two to three years down the line,” Manish Kumar Sinha, commissioner, Central Board of Excise and Customs (CBEC), said at the Business Standard Round Table on the goods and services tax here on Wednesday. He, however, added that it was his opinion, and a final decision would be taken by the political leadership.

Sinha said there could be one standard rate, and two more rates — one each below and above the standard rate — for a few items. The first big restructuring of rates could come in the next Budget or before that.

Sinha said rates were not fixed in a vacuum. When the rates were fixed on the basis of revenue neutral rates (RNR), not much consultation was done with industry. “However, when the rates are rationalised, industry would be consulted widely,” he said. “Rationalisation of rates is much more complex exercise. We have to see that a particular sector is not adversely affected.”

At the event, Jain said that while the GST might be a good tax, it was certainly not simple. He questioned whether e-way bill would improve the ease of doing business. “Why is it (e-way bill) required? Do you really need it?” he wondered.

Jain said over Rs 92,000 crore that came in July from the GST might be an indicator of healthy revenue collections, as input credits on pre-GST stock were yet to be claimed.

Asked if there was any difference between the levels of preparedness regarding GST transition in large corporates and smaller businesses, PepsiCo India CFO Duttagupta said his company had started preparing early and found the transition to be relatively smooth. “It is not necessary that if you are bigger, you are faster. There have been smaller companies which are very well informed and well prepared,” he said.

Former GSTN chairman Navin Kumar said the network worked on moving targets. He said that when the GSTN conducted a study on the growth rate of assessees under the GST, it estimated 400,000 assesses. However, there were 2 million new registrations, handsomely beating the internal estimates. “These were beyond our expectations, but we still coped (with it),” Kumar said.

GSTN CEO Prakash Kumar said 30,000 new businesses were registering on the GSTN every day, which means one million per month on average. “We started all clean because we did not take invalid PAN cards,” he said. In the pre-GST regime, there were many entities which were giving invalid PAN cards for the purposes of VAT, he added.

Given the huge amount of data being gathered under the GST, NSDL CEO Rai spoke of the need to protect, encrypt and retrieve huge stash of data and be alert against cyberattacks. “The survival of any organisation depends on how secure the data is. We have seen a lot of attacks coming from Pakistan and China. We have had days with 450 attacks per day,” Rai said. NSDL is one of the many GST solutions provider.

Nishant Shah of ELP said that in spite of teething problems in the initial stages, trade and industry had realised that in the long-run the GST was good for the economy. “Most businesses have undertaken preparatory steps, and have worked with their supply chain or distributors,” Shah said.

To a question on GST jitters leading to a slowdown in the economic growth, Sinha said de-stocking of goods in the month of June was a blip.
Stressing that GDP growth was slower because of many factors, he said, “I don’t see any slowdown (due to GST).”

He said the GST was successful on three counts — it did not lead to spike in prices, or any scarcity of goods and services and the common man accepted it. Sinha said the country was in a sweet spot so far as inflation was concerned.

On why the GST rate was 5 per cent on ghee and zero per cent on mutton, he said the principle was that items which were not processed would be zero rated.
source:http://www.business-standard.com/article/economy-policy/bs-gst-round-table-2017-slabs-for-taxes-may-be-reduced-to-three-in-2-3-yrs-117090700059_1.html