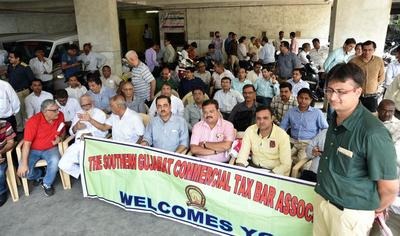 Surat: Hundreds of tax consultants in the city participated in a token strike on Tuesday to protest the non-preparedness of the central government over Goods and Service Tax (GST) and the difficulties faced by the trade and professional for its compliance.
The strike was announced by the South Gujarat Commercial Tax Bar Association (SGCTBA). The tax consultants gathered at the Sales Tax Bhavan at Nanpura and held sit-in protest. Later, the SGCTBA office-bearers submitted a memorandum to joint commissioner of commercial tax with a slew of demands. The tax consultants demanded that the filing of GST returns should be made on quarterly basis instead of monthly returns, extension of filing of GSTR 1, 2 and 3 should be extended to 25 days, 30 days and 35 days instead of the current 10 days, 15 days and 20 days, accepting the payment through credit and debit cards without the use of one-time password (OTPs) etc.
Citing the problems faced by the tax professional and traders on the GST portal, the SGCTBA office-bearers said that the data are not visible on the portal, abolishing late fee, OTPs sent to the mobile number of traders instead of tax consultants, single common cash register to be maintained, issuing the registration certificate from July 1.
President of SGCTBA Prashant Shah said, “This is a premature launch of GST. Nor the government, its departments and officials are prepared to handle GST. There is no time given to traders and consultants. Before launching GST on July 1, the government should have run several programmes to educate the traders, consultants and tax officials six months ago.”
Shah added, “We are planning to take this agitation at national level. We are contacting the bar associations in other states and will shortly finalise the action.”
source:http://timesofindia.indiatimes.com/city/surat/tax-consultants-protest-against-glitches-in-gst/articleshow/60486635.cms