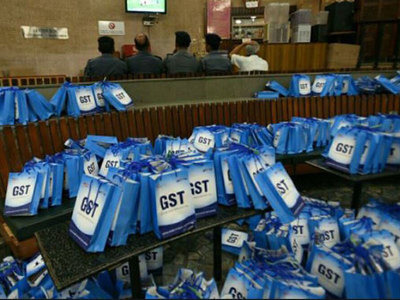 NEW DELHI: As much as Rs 65,000 crore out of the nearly Rs 95,000 crore tax collections in July — the first month of GST — have been claimed as transitional credit by taxpayers, prompting the CBEC to order a scrutiny of all cases above Rs 1 crore.
The Goods and Services Tax (GST) regime, which kicked in from July 1, allows tax credit on stock purchased during the previous tax regime.
This facility is available only up to 6 months from the date of GST rollout+ .
The Central Board of Excise and Customs (CBEC), the body which deals with formulation and implementation of policy concerning the levy and collection of indirect taxes, in a letter dated September 11 has asked tax officials to verify GST transitional credit claims of over Rs 1 crore made by 162 entities.

Dharmendra Pradhan backs daily fuel price revision, wants petrol, diesel to come under GST
In the transitional credit form TRAN-1 filed by taxpayers along with their maiden returns for July, businesses have claimed a credit of over Rs 65,000 crore for excise, service tax or VAT paid before the GST was implemented from July 1+ .
In light of such huge claims, CBEC Member Mahender Singh in the letter to chief commissioners said that as per the GST law, carry forward of transitional credit is permitted only when such credit is permissible under the law.
“The possibility of claiming ineligible credit due to mistake or confusion cannot be ruled out… It is desired that the claims of ITC (input tax credit) of more than Rs 1 crore may be verified in a time-bound manner,” the CBEC emphasised.
It asked the chief commissioners to send a report to the CBEC by September 20 on the claims made by these 162 companies.
To ensure only eligible credit is carried forward in the GST regime, the CBEC has asked field offices to match the credit claimed with closing balance in returns filed under the earlier law.
They are also required to check if the credit is eligible under the GST laws.
Till last week, as many as 70 per cent of 59.57 lakh taxpayers had filed returns for July, amounting to maiden revenue of Rs 95,000 crore under the GST regime.
However, out of this, the input tax credit (ITC) data for Central GST (CGST) claimed in TRAN-1 has shown that registered businesses have claimed over Rs 65,000 crore as transitional credit.
The government, in late August, had come out with form TRAN-1 for businesses to claim credit for taxes paid on transition stock.
Traders and retailers had 90 days to file for a claim.
Also, businesses have been allowed to revise the form once till October 31.
PwC India Partner and Leader (indirect tax) Pratik Jain said the Rs 65,000 crore amount looks high, particularly given the fact that a lot of large companies have not yet submitted TRAN-1.
Under the transition rules, traders and retailers are allowed to claim a credit of 60 per cent of taxes paid earlier against the CGST or SGST dues where the tax rate exceeds 18 per cent In cases where the GST rate is below 18 per cent, only 40 per cent deemed credit will be available against CGST and SGST dues.
Further, the government would also refund 100 per cent excise duty on goods that cost above Rs 25,000 and bear a brand name of the manufacturer and are serially numbered such as TV, fridge or car chassis.
To avail this, a manufacturer can issue a Credit Transfer Document (CTD) to the dealer as evidence of excise payment on goods cleared before the introduction of GST.
The dealer availing credit using CTD will also have to maintain copies of all invoices relating to buying and selling from the manufacturer, through intermediate dealers.
source:http://timesofindia.indiatimes.com/business/india-business/rs-65000-crore-gst-credit-cbec-scans-high-value-claims/articleshow/60701491.cms