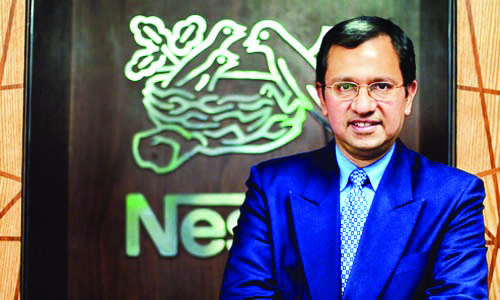 New Delhi, Oct 5 () Describing 3-month old GST as a “fairly encouraging exercise”, Nestle India CMD Suresh Narayanan today said there are a few operational issues that are still being ironed out.
As far as the FMCG industry is concerned, he said, with the passage of time there would be improvement and settling into the new indirect tax regime will turn better.
“Since the early part of July we had settling issues but August was certainly better and September has also been reasonably good as far as settling into the GST regime is concerned,” Narayanan said.
There are still a few operational issues that are being ironed out in terms of comprehension, submission of returns, but by and large it has been a fairly encouraging exercise, he said in a CNBC-TV18 interview.
FMCG companies had witnessed slowdown and reported tepid sales in the April-June quarter because of destocking by trade partners, who purchased limited inventory due to uncertainty ahead of implementation of the Goods and Services Tax (GST) from July 1.
When asked about the company’s plans of expanding the product portfolio and getting into new categories, Narayanan said it will be looking at expanding the scope of existing products and also selectively getting into new categories.
“The challenge for Nestle is not what to launch, its when to launch and we are blessed as a company with a portfolio of many brands,” he said.
Reflecting on the company’s ambition of double digit growth, he said in terms of reported sales there is a GST impact of almost 525 basis points that gets impacted on the company’s sales, therefore the number might be a little lower that what a double digit would be.
“As far as the company is concerned, we had recorded an 8.8 per cent growth last quarter and we had impact of GST in that and we were within the whisker of what we were looking at and therefore the ambition of double digit growth is something I would not like to lose right now,” he added. PRJ SA
SOURCE:https://timesofindia.indiatimes.com/business/india-business/few-gst-operational-issues-still-being-ironed-out-nestle/articleshow/60958927.cms