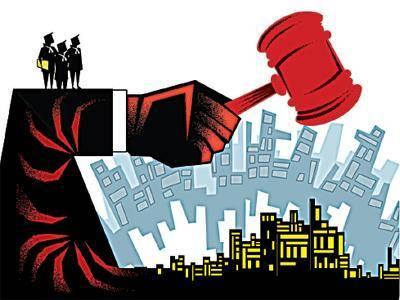 Indore: The welts of RERA and GST has shown its impact on the real estate market as official records of the district stamp and registrar department has shown a deficit of about 20 per cent in earning through property registrations in the last two months.
The department, which has managed to record a growth of about 25 per cent till July with earnings of Rs 91 crore, has recorded a dip in revenue to Rs 70.34 crore and is expected to go down to Rs 71.51 crore in the next two months.
Experts claim that since demonetisation, RERA and GST has kept investors away from making new deals.
“The actual buyers who want to buy property in Indore as a one-time investment to live in or do business at are the ones making deals,” senior district registrar BK More told TOI.
He said despite a dip in revenue generation, the department has managed to cross the second quarter’s target, i.e., Rs 211 crore by recording earnings of Rs 232 crore. Despite the registrar department’s tall claim, trends witnessed in the real estate market in the last two months has increased worries for senior administrative officials to meet the annual target of Rs 1,055 crore for 2017-18. Against an annual target of Rs 1081 crore for 2016-17, the department had recorded earnings of Rs 836 Crore. Market experts blamed demonetisation for the lull in the realty sector.
CREDAI Indore chapter’s president Vijay Gandhi said, “Around 700 new and ongoing projects had applied for RERA but registration numbers for only 185 projects have been issued. RERA has put builders and colonizers on a wait and watch mode.”
He added GST has also halted the natural growth of the realty market as only end users buy property.
“Amid the confusion over GST, builders and colonisers are calculating tax between 12 and 18 per cent. GST is expected to increase the cost of property by 10 per cent,” Gandhi said.
SOURCE:https://timesofindia.indiatimes.com/city/indore/rera-gst-makes-income-through-registrations-dip-by-20/articleshow/60962681.cms