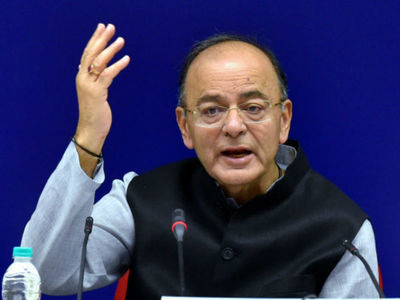 WASHINGTON/NEW DELHI: Finance minister Arun Jaitley has decided to kick off a discussions on expanding goods and services tax (GST) to the real estate sector, a move aimed at checking tax evasion in the sector known for cash-based transactions and lowering prices for flat buyers in the long-run.
Delivering a lecture at Harvard University, Jaitley said, the matter will be discussed in the next meeting of the GST, which is scheduled on November 9.
Petroleum products, alcohol and real estate are three sectors which were kept out of GST as several states were opposed to it.
Several others such as Delhi and Jammu & Kashmir have, however, backed the inclusion of real estate in the new indirect tax regime. “The one sector in India where maximum amount of tax evasion and cash generation takes place and which is still outside GST is real estate. Some of the states have been pressing for it. I personally believe that there is a strong case to bring real estate into the GST,” Jaitley said, while delivering the ‘Annual Mahindra Lecture’ on India’s tax reforms.
“In the next meeting itself, we are addressing one of the problem areas or at least (having) discussion (on) it. Some states want, some do not. There are two views. Therefore, by discussion, we would try to reach one view.”
The finance minister said the move would benefit the consumers who will only have to pay one “final tax” on the whole product. “As a result, the final tax paid on the whole product in the GST would almost be negligible,” he said.
While under-construction flats from buyers are already under GST, inclusion of the entire value chain will mean that land purchase will face the indirect tax instead of stamp duty that varies across states.
“The real estate has to fully come under GST then stamp duty has to be subsumed. Only when this is done can we say that the sector is completely covered by GST,” said MS Mani tax partner at Deloitte. While builders will get input tax credit for GST paid on steel, cement, paint and sanitary and electrical fittings, if land purchase faces the new levy then the credit base will go up and so will the gain to the buyer. “Including the real estate under GST will increase the tax base, reduce the cascading of taxes and bring further transparency in the system. However, most international V AT jurisdictions struggle to find the right mechanism to tax all aspects of this sector,” said Bipin Sapra, partner at Ernst & Young.
In Video: Talks on getting real estate under GST next month: Arun Jaitley
source:https://timesofindia.indiatimes.com/business/india-business/talks-on-getting-real-estate-under-gst-next-month-arun-jaitley/articleshow/61060758.cms