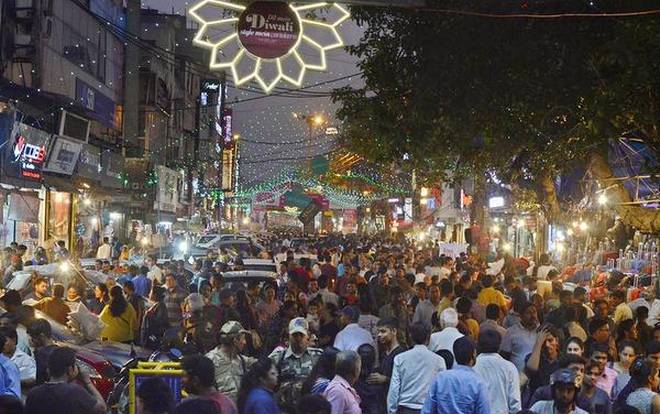 Traders say though footfall has gone up, business is slow, yet to return to normal

After nearly a year of slow sales that traders first blamed on demonetisation and then on implementation of the Goods and Services Tax (GST), shop owners in the city said things are slowly returning to normal ahead of Diwali. Though footfall has gone up, traders feel that business is down this year compared to last Diwali.

Om Prakash, owner of Rupali Selection, Karol Bagh said, “The worst hit are small-scale traders like us, who are struggling at a time of the year when our business is usually in full bloom. We don’t have any sales this Diwali.”

On the sales pattern of this year’s Diwali, he said, “This is the first Diwali during which we have suffered such a huge loss that we can’t even pay the rent for our shop. Just as the ill effects of demonetisation were being brought under control, GST was implemented.”

Sweet shops and dry fruits shops were almost empty because of increasing popularity of branded packaged gifts. However, owing to the allure of the festive season, a huge crowd was seen in the Karol Bagh Market.

V.K. Sharma, a government employee, said, “The purchasing power has decreased, the demand is the same. With increased prices of the products, we have to buy inferior quality products to fit our budget.”

The tradition of giving elaborate gifts during Diwali has also been affected, feels Gajendra Bansal, who makes customised hampers every Diwali for corporate gifting. “Several regular customers have either ordered only half the quantity or have compromised on the quality of items,” says Mr. Bansal.

Mihendra Pratap, a Mumbai student who has come to celebrate Diwali with his family, said: “The poor man and the lower middle class have been the worst hit and are facing the ill effects of the policies. And worse, they are not even aware of these unplanned policy changes that are directly affecting them.”

Organisers of Diwali melas in the city said people show up but are reluctant to make purchases.
source:http://www.thehindu.com/news/cities/Delhi/after-gst-hit-sales-improve-for-diwali/article19867705.ece