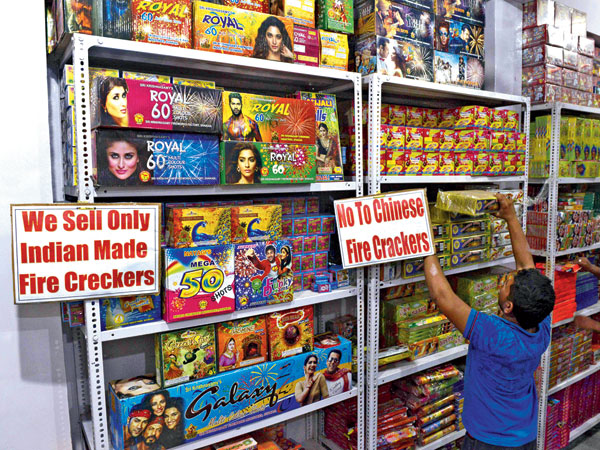 KOLKATA: Blame it on GST, if you think there are fewer varieties of firecrackers this year and that too way costlier than what it was last year.
According to the sellers and organi sers of Bazi Bazaar -the firecracker fair at Esplanade that was thrown open to public on Sunday -there are no new varieties of firecrackers this year mainly because the entire trade at Sivakasi in Tamil Nadu has been largely hit by the goods and services tax, 28% on MRP. Prior to imposition of GST on firecrackers, the traders had to pay a tax of 14.5%.
“The increase in taxation has hit the production as well as the wholesale business. People come to Bazi Bazaar to buy new varieties of crackers but this time there are no new crackers. Old crackers have arrived in new packaging and names. We have raised the issue with the wholesalers but they are helpless as they could not experiment with new crackers after GST implementation,” said Santanu Dutta, joint secretary of All Bengal Firecracker Seller Samity .
Firecrackers have also become costlier compared to the previous year with 5% to 7% rise in the maximum retail price (MRP). To top it, there has been a 28% GST on the MRP. According to Azad Fi recrakers’ S Ahmed, who has a shop at Canning Street and a stall at the fair, generally, retail market picks up a few days before Diwali. “But in the wholesale segment, firecrackers business has seen a slump of around 30% compared to last year,” he said. “There are multiple reasons for the sudden dip in the market volume.Implementation of GST and ban on Chinese crackers are the major reasons,” he added.
The Bazi Baazar, which started in 1995, has shrunk in size over the years.Compared to 52 stalls last year, this time the number of stalls has come down to 48.
Absence of new variety of crackers is another reason for the fair to lose its sheen. “People ask for new varieties of shells. But most of the shells manufactured cross the threshold limit of 90 decibels. Most of the innovations in the fireworks industry are shell-based and to make things worse, the GST has cut down on innovations,” said one of the traders.
“We generally buy crackers from Howrah. This year, my son asked me to visit the fair hoping to get some new varieties of crackers. But we have found nothing new out here,” said Dinesh Mundhra, a businessman and a resident of Liluah.
Ballygunge resident Saikat Chatterjee said: “The prices have increased.Charkhas that I had bought at Rs 20 per piece last year is now being sold at Rs 35.For a standard size TubriI had to pay Rs 60 compared to Rs 40 last year.”
source:https://timesofindia.indiatimes.com/city/kolkata/gst-takes-sparks-out-of-cracker-fair/articleshow/61095908.cms