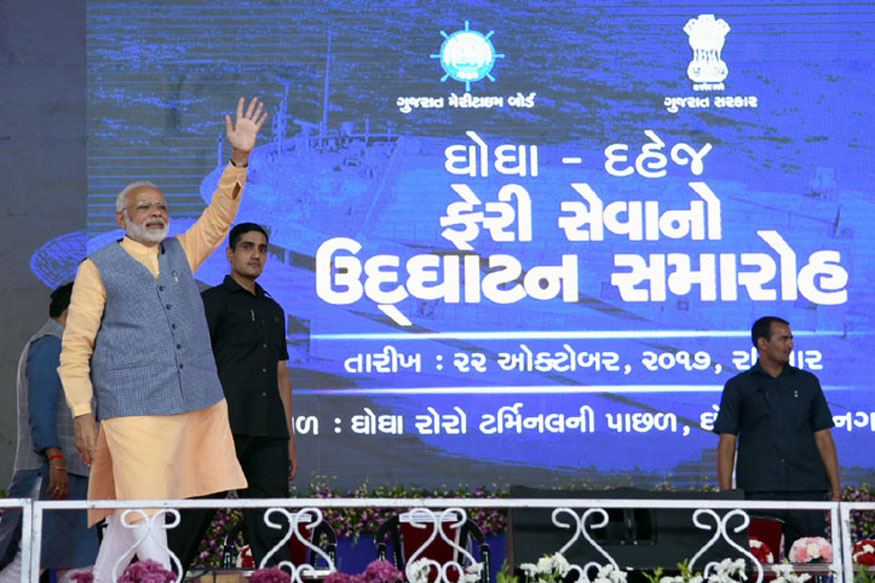 Dahej (Gujarat): Prime Minister Narendra Modi on Sunday asserted that the process of taking “important decisions” regarding the economic reforms will continue. The prime minister’s assertion came at a time when the Opposition parties have been attacking demonetisation and GST rollout.

On a day-long visit to Gujarat, Modi also reached out to traders, saying their past records will not be checked by the income tax department if they join the formal economy by getting themselves registered under the GST regime.

“After all reforms and hardcore decisions, the economy of the country is on track and is going in the right direction,” Modi said addressing a rally Dahej.

“Many economists have agreed unanimously that the fundamentals of the economy are strong,” he added. He was apparently answering the critics who have been saying that the economy is in bad state.

“If we have a look at the figures which have come recently, the production of coal, electricity, natural gas and other items has increased tremendously. Foreign investors are making record investments in the country. The foreign exchange reserves of the country have reached 40,000 crore dollars from 30,000 crore dollars,” Modi said.

“We have taken important decisions regarding reforms and this process will continue. Financial stability of the country will be maintained while initiating reforms. We will take all necessary steps to increase investments and bring in the economic development,” the prime minister said.

Congress vice president Rahul Gandhi had attacked Modi during his recent campaign tour in Gujarat, after the growth rate slipped to 5.7 percent in the first quarter of 2017-18.

Talking about GST, Modi said the number of traders joining the new indirect tax regime is increasing day by day. “In the last few months, 27 lakh additional people have registered themselves for this indirect tax… No businessmen wants to indulge in tax evasion. But tax rules, system, tax officials and even politicians are forcing them to do it,” he said.

“I know, that those who are joining have fear that their past records will be checked. I assure you that no tax officials will be allowed to open past records of those who want to come in the mainstream,” the prime minister declared. He said that the Goods and Services Tax (GST) has stopped corruption at check posts on borders of each states.

“The GST has eliminated check posts on borders. Trucks do not have to wait for days and corruption at check posts has stopped. Now, those who used to take contracts for ensuring passage of your trucks through the check posts are naturally very angry with me,” Modi said.
source:http://www.news18.com/news/india/vasundhara-raje-govts-move-to-gag-the-press-crosses-lakshman-rekha-drawn-by-sc-1553873.html