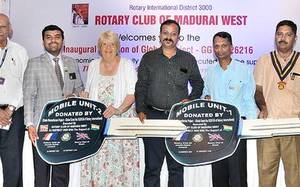 The Madurai Bench of the Madras High Court has directed the Prime Minister’s Office and the Ministry of Finance to file a counter to a petition seeking e-way bill for GST.

Activist K. K. Ramesh, in his petition filed before the Bench, claimed that there was a lot of confusion in the levy and collection of GST for goods in transit.

Irregularities were committed by traders, particularly by hotels and restaurants, by collecting more than the prescribed rate, he said. The common man was put to a lot of hardship as there were no regulations and no separate officer to monitor the traders, the petitioner said and contended that such irregularities could be controlled if e-way bill (online bill) was made compulsory for goods of value above ₹5,000.

He said that there should be a flying squad at the State, district and zone levels to monitor the movement of goods and the e-way bills.

A division bench of Justices M. Venugopal and Abdul Quddhose on Monday directed the Prime Minister’s Office, represented by Principal Secretary to the Prime Minister, and the Ministry of Finance, represented by its Principal Secretary, to file a counter. The court had earlier sent notices to the respondents, following which they were asked to file counters.

The case has been posted for further hearing to November 14.
source:http://www.thehindu.com/news/cities/Madurai/pmo/article19907187.ece