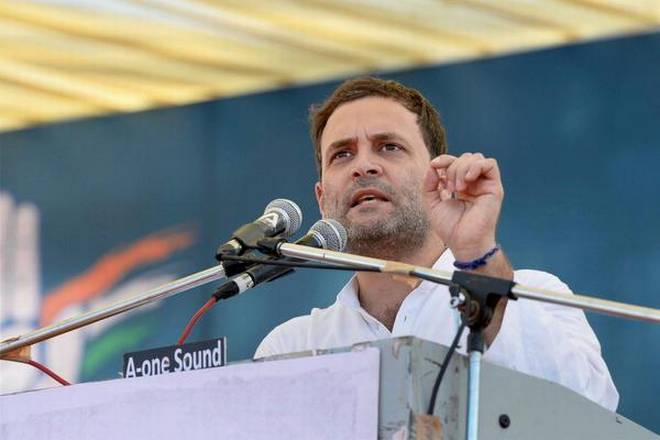 Addressing a rally here on Monday, Mr. Gandhi slammed the Central government for a ‘faulty tax regime that is destroying small businessmen and industries in the country.’

“The government ignored all our suggestions on GST and introduced it with celebrations at midnight. In their GST, there is the highest 28% tax and three return forms that makes the GST Gabbar Singh Tax,” Mr. Gandhi said.

The rally was organised by OBC leader Alpesh Thakor, who joined the Congress, giving a boost to the party ahead of the crucial Assembly polls to be held later this year.

In his 30-minute speech, Mr. Gandhi asked the Prime Minister to break his silence over the business dealings of BJP president Amit Shah’s son Jay Shah, whose company allegedly saw an unprecedented growth in turnover after the BJP came to power at the Centre.Debunking the Gujarat model of development, Mr. Gandhi said there were almost 30 lakh youth unemployed in the State because the BJP government had failed to provide jobs to them.

“Today in Gujarat, every community is on agitation because the BJP government in the State caters to only a few industrialists and their interests at the cost of the public,” he said, referring to social agitations by the Patidar community seeking quotas in jobs and education, OBCs for jobs and SCs seeking land for agriculture.

He said, “Modiji gave benefits and incentives of ₹ 35,000 crore to the Nano car factory in the State but the car is nowhere to be seen. With that amount, he could have waived off the entire debt of farmers in Gujarat. Now the people of Gujarat are angry and therefore there are social agitations. You cannot mute the voice of Hardik Patel or Alpesh Thakor or Jignesh Mevani because their voice is the voice of the people.”

Mr. Gandhi referred to allegations by a key aide of Hardik Patel that the BJP offered him ₹ 1 crore to break away from the agitation. “Whether they give one crore, 100 crore, 1000 crore or the wealth of the world, the voice of Gujarat cannot be silenced or muted or bought over,” he said.

The Congress, he added, would work for the welfare of farmers, labourers, youth and women and would have specific schemes for them.