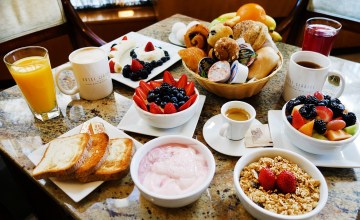 The restaurant sector, despite its remarkable growth story, seems to be continually getting on the wrong side of the regulatory authorities.

When the media was celebrating the distinct possibility of the GST levied on restaurants being reduced to a uniform 12 per cent – instead of the present slabs of 12 per cent for non-AC restaurants and 18 per cent for their AC counterparts – what they missed was the massive downside of the proposal now being considered by a five-member group of ministers (GoM) set up by the GST Council after its last meeting on October 6.

Consisting of Bihar deputy chief minister Sushil Kumar Modi, the finance ministers of Assam (Himanta Biswa Sarma), Jammu and Kashmir (Haseeb Drabu) and Punjab (Manpreet Singh Badal), and Chhattisgarh commercial taxes minister Amar Agrawal, the GoM, at its next meeting on October 29, will consider the GST Council’s suggestion that the rate reduction should take place simultaneously with a withdrawal of input tax credits, which are granted to GST payers to enable them to deduct the various taxes they pay on inputs from the tax they pay on the output.

Restaurants, for instance, are allowed to deduct the GST they pay on rentals, processed foods, as well as housekeeping and security services, which they almost always outsource, from the GST they are required to collect from customers for food and soft beverages (they get no such benefit from alcohol sales, which are still governed by the old and unchanged taxation system).
The GST Council believes the restaurants are not passing on the benefits of this system to customers and, therefore, not eligible for input tax credits (ITCs). ITCs works in a way that all vendors and suppliers who may have earlier been in the unorganised sector are incentivised to come into the organised sector and file tax returns. All participants in the food supply chain as well as restaurants are expected to pay taxes at reasonable rates. Fair enough.

If they are withdrawn, however, the National Restaurant Association of India (NRAI) believes, the move could lead to a bloodbath in the sector, which is still reeling from the effects of demonetisation, the complicated switchover to the GST system, and the recent Supreme Court-imposed ban on alcohol sales within 500 metres of national highways (the matter finally got settled in mid-July, when the apex court upheld the denotification of national highways by city administrations).

A withdrawal of ITCs, NRAI president Riyaaz Amlani pointed out, would raise the operating costs of restaurants, especially the standalones, by 7 per cent-10 per cent and cause an erosion of up to 40 per cent of their margins.

Restaurants in five-star hotels, on the other hand, are not much affected. They don’t have to pay rents and housekeeping and other support services are available to them in-house, which may explain the lukewarm response of the luxury hotels to the move, for they would stand to gain much from the rate drop and lose little from the withdrawal of ITCs.

Countering the GST Council’s charge that restaurants have not cared to pass on the benefits of ITCs to their customers, Amlani points to three ground realities:

(1) No more than 30 per cent of suppliers have been able to register themselves for GST. So there’s no ITC that can be claimed for a majority of the purchases that restaurants make.

(2) In the new tax regime, certain critical items, such as processed food, have become more expensive because of GST going up from 5 per cent to 12 per cent. “Taxes on many such inputs have gone up, so if we do not get ITC, our cost of running restaurants will go up, leading to higher menu prices for customers,” Amlani cautioned.

(3) restaurants are battling food inflation, rising HLP (heat, light and power) costs and wages, and intense competition, which are buffeting their margins and at the same time stopping them from charging more realistic prices.

“The core of GST is the implementation of ITC, which removes tax on tax (popularly known as cascading of taxes),” says Amlani. “This undesirable tax cascade, impacting the common man, has been the bane of older tax systems prevalent before the recently implemented Goods and Services Tax. If GST is brought down to 12 per cent without continuing ITCs, it will undermine the spirit and intent of GST and be akin to going two steps behind the archaic tax that previously existed. This move could also be very confusing for customers as prices of goods will go up despite a fall in tax rates.”

For the NRAI, it’s back to the trenches and its delegations are meeting the GoM members in five state capitals in the week ahead to lobby for a 12 per cent GST minus the dropping of ITCs. The fate of the matter will be sealed at the next GoM meeting on October 29, and if its members green-light the move, it will become the law when the GST Council meets in Guwahati on November 9.

For restaurants, especially the standalones, that would spell serious trouble.